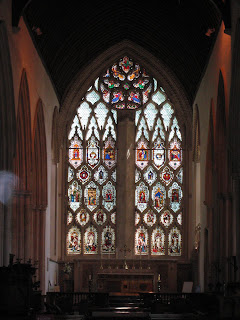 In July 2009 I went to Oxford, England for the Oxford Experience at Christ Church. Our tutor led us on a tour of Oxford Movement sites first in Oxford and then in the area around Oxford: Littlemore, Chiselhampton, Dorchester, and Jericho. At Dorchester-on-Thames we toured the Dorchester Abbey Church quite extensively. Dr. Kate Tiller, our tutor had edited a book on the history of the Abbey. Our purpose in touring it was to focus on the Anglo-Catholic renovations made to the church in the nineteenth century. Before that, it had fallen into disrepair. When the monasteries were suppressed during the reign of Henry VIII, Dorchester's church had been saved from destruction, like the Abbey, by Sir Richard Bewfforeste buying it from the Court of Augmentations. Here are some pictures.

When we left Dorchester-on-Thames we drove by and Kate pointed out the Catholic Church in town, St. Birinus. Turns out that in the twenty-first century, St. Birinus has been renovated quite a bit too. A Rood Screen has been installed and other improvements made. The New Liturgical Movement blog has quite a few posts here.

William Wilkinson Wardell (1824-1899) was a friend and student of A.W.N. Pugin and a convert from Anglicanism in 1843. In 1858 he emigrated to Australia, where he built such notable churches as St Mary's Cathedral, Sydney and St Patrick's Cathedral, Melbourne. However, before he left for the Antipodes, he built some 30 churches in England.

This activity came shortly after the Catholic Emancipation Act (1829), which restored the Catholic Hierarchy of England and Wales and made possible the public worship of Catholics. This obviously led to a revival of Catholic England and a spate of church building. One such building - among the first Catholic churches to be built after the Reformation - was the church of St Birinus in Dorchester-on-Thames in Oxfordshire. As with so many of these early churches, it was sited in a historically important town: in 634 Pope Honorius I had sent bishop Birinus to preach the Gospel in these parts and he evangelised King Cynegils of Wessex and established his see at Dorchester. After his canonisation, his shrine formed the centre of the Augustianian abbey of Ss Peter and Paul in Dorchester.

Waddell's church was begun in 1846 and completed three years later. It is a small chapel in a prominent position, a stone's throw from the abbey and by the bridge that fords the river Thames in which St Birinus had baptised thousands. The church is an almost exact replica of a 14th-century Gothic chapel. It is constructed of Littlemore stone with a Caen stone porch and the interior is just one rectangular nave with a smaller chancel in the east end.
Posted by Stephanie A. Mann at 2:05 AM