A New Thomas is Chancellor of England 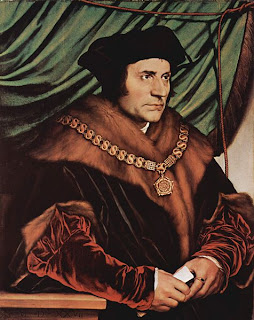 After the dismissal of Thomas Wolsey as Chancellor on October 25th, Henry did something new: he named a lay Chancellor. Sir Thomas More, Knight and Member of the Privy Council succeeded the Archbishop of York on October 26, 1529, while Henry re-evaluated his efforts to replace Katherine of Aragon with Anne Boleyn as his wife. Thomas More, as Chancellor, would not be involved in these efforts: Thomas Cromwell, who would eventually succeed him, would take the lead. Since More was a layman, he did not give his opinion on the validity of Henry's marriage.

More concentrated on the High Court of Chancery, where he judged many cases, including those for heresy, especially of relapsed heretics.
He resigned on May 16, 1532, pleading ill health--but actually he had opposed the latest of Henry's Acts of Parliament to separate English spiritual and ecclesiastical matters from the Pope in Rome, and More knew that Henry would not accept further opposition. He retired in poverty to his home in Chelsea, after less than three years in office.
Posted by Stephanie A. Mann at 2:20 AM