Henry VIII, Defender of the Faith!! 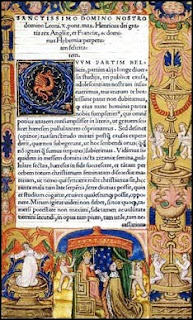 Pope Leo X conferred the honor and title of "Defender of the Faith" upon King Henry VIII on October 11, 1521! Henry VIII sought the title and wrote his Assertio Septem Sacramentorum (Defense of the Seven Sacraments) as a refutation of Martin Luther's teaching to obtain it.

Henry further wrote to Pope Leo X that it was part of his duty as King of England to defend the teachings of the Catholic Church:

No duty is more incumbent on a Catholic sovereign than to preserve and increase the Christian faith and religion and the proofs thereof, and to trans­mit them preserved thus inviolate to posterity, by his example in preventing them from being destroyed by any assailant of the Faith or in any wise impaired.

He went on to comment on his efforts to eliminate the heresy of Luther's teaching:

But convinced that, in our ardour for the welfare of Christendom, in our zeal for the Catholic Faith and our devotion to the Apostolic See, we had not yet done enough, we determined to show by our own writings our attitude towards Luther and our opinion of his vile books; to manifest more openly to all the world that we shall ever defend and uphold the Holy Roman Church, not only by force of arms but by the resources of our intelligence and our services as a Christian.

For this reason we have thought that this first attempt of our modest ability and learning could not be more worthily dedicated than to your Holiness, both as a token of our filial reverence and an acknowledgment of your careful solicitude for the weal of Christendom.

We feel assured that our first fruits will be enhanced in value if it be approved by the wholesome judgment of your Blessedness. May you live long and happily!

From our Royal Palace at Greenwich, the twenty-first day of May, 1521.

Your Holiness' most devoted and humble son, Henry, by the grace of God King of England and France, and Lord of Ireland.

Pope Paul III stripped Henry of the title in 1538 when he excommunicated the former "devoted and humble son" after the break from Rome. Parliament restored the title for Edward VI and again after the Restoration in 1660. Queen Elizabeth II swore an oath to defend the Church of England at her coronation and she is known as the Defender of the Faith. If Charles, the Prince of Wales, is crowned, he plans to be called the Defender of Faith (omitting the article). That might mean that this oath is somehow revised:

The Archbishop of Canterbury: "Will you to the utmost of your power maintain the Laws of God and the true profession of the Gospel? Will you to the utmost of your power maintain in the United Kingdom the Protestant Reformed Religion established by law? Will you maintain and preserve inviolable the settlement of the Church of England, and the doctrine, worship, discipline, and government thereof, as by law established in England? And will you preserve unto the Bishops and Clergy of England, and to the Churches there committed to their charge, all such rights and privileges, as by law do or shall appertain to them or any of them?"
Posted by Stephanie A. Mann at 2:37 AM