A Renaissance Humanist is Born 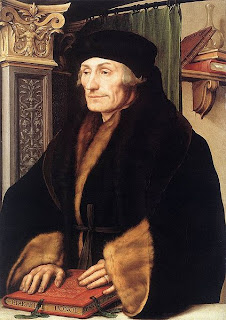 Desiderius Erasmus was born on October 27, 1466. He traveled several times to England and met several prominent figures of the English Reformation period.

In 1499 he came to England, hoping to find some employment (as he had left the monastery) and did meet John Colet, then preaching on St. Paul at Oxford. Without any preferment, he traveled to Italy for further study.
He went back to England in 1505 and then met William Warham, Archbishop of Canterbury, Richard Foxe, Archbishop of Winchester, and Bishop John Fisher, who was overseeing the foundation of Christ's College at Cambridge.
Erasmus returned to England in 1509 and wrote The Praise of Folly with its Latin pun on Thomas More's name: Moriae encomium; he left England to have the book printed in Paris. In August of 1511, John Fisher invited him to teach Greek at Cambridge and Erasmus also received a living and a pension. In 1513, he went to Basel where he accomplished much of the work on his Novum Instrumentum edition of the New Testament. In 1515, 1516, and 1517, he made brief visits to England.
Unlike More and Fisher, however, Erasmus did not engage in apologetic works on Catholic teaching in answer to Martin Luther or other reformers. Like the late John Colet, he agreed with Luther that reforms were necessary in the Church, but he certainly was not in favor of completely dividing from the Catholic Church. He mourned the executions of Thomas More and John Fisher, but probably did not understand the faith, certitude and commitment that motivated them to oppose Henry VIII and refuse to accept his supremacy.
Posted by Stephanie A. Mann at 2:33 AM