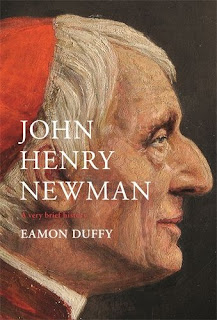 Newman was a very unusual theologian. Mr. Duffy is right to point out that he was not so much a Victorian as a Romantic, less than six years younger than Keats, though he would outlive, mostly by decades, all the other great English writers of his generation. Like St. Augustine, whose works were partly responsible for Newman’s conversion from the Anglican to the Catholic Church, Newman did his theology, always, by thinking for himself about the truths of faith that he held with the loyalty of deep feeling.

When Newman looked back, it was not to the high Middle Ages or the Counter-Reformation, but to the early church of the Greek and Latin fathers. Neither Thomism nor the Neo-Scholasticism practiced by his contemporaries hampered the speculation of his free intellect, even if doctrinal orthodoxy framed and anchored everything he wrote. Newman had the greatest respect for rational argument, and was unusually good at it, but at the same time he knew (as did Augustine) that no one had ever become a Christian because of a logical proof.

It may be behind the paywall but I searched for it ("Lucy Beckett Saint John Henry Newman Duffy") and gained access.

The timing of this review with Beckett's emphasis on Newman's motto as a Cardinal in the title ("‘John Henry Newman’ Review: A Heart That Speaks to Hearts") seems providential as two converts from Anglicanism reflect on their past, present, and future.

Reverend George W. Rutler, oft mentioned on this blog, looks back on his ordination as an Episcopalian priest on December 20, 1969 in Crisis Magazine. He mentions some of the weaknesses he soon found in the Episcopalian church and his decision to join the Catholic Church and become a priest. Naturally, he highlights St. John Henry Newman's influence:

Let mine be a letter of affection without reproach, from one whose roots disdain emotion, to those who were patient with me when I first took up the promise to serve God, albeit in a mix of innocence and naīveté. There was a blessing and benison in my ignorance of the many trials that would lie ahead, for had I “loved to choose and see my path,” I would have hesitated. One cannot pretend that the path to Rome was more difficult than what one frequently found once having arrived. If there are more years allowed me in the course ahead, I may write a lengthier story of my experiences, though in some quarters it might be a precipitate of agitation. Suffice it to say that Saint John Henry Newman was an agent in my conversion. Once, standing in his pulpit in the University Church of Saint Mary the Virgin, I felt something like a bolt of lightning. At the moment, I did not understand it. Now I do. Newman said that as a Protestant “I felt my religion dreary, but not my life—but as a Catholic, my life dreary, not my religion.” Lacking his depth of soul, I never knew dreariness in any quarter. But if wistfulness is a pastiche of agony, I at least have known that no human journey is without interruptions of happiness.

As Beckett writes of Newman in her review:

For years, Newman’s life as a Catholic was hard. He had lost the sympathy of his family and most of his friends, as well as a comfortable and highly respected career—not to mention the architecture, language, music and intellectual company of Oxford Anglicanism. Instead he had to cope with ugly new churches and the suspicion directed toward him by English Catholics. Some of these were ill-educated because of longstanding Catholic exclusion from the best schools and from Oxford and Cambridge. Others were rabid philistine converts.

Today, the Fourth Sunday of Advent, another clergyman from the Anglican Communion becomes a Catholic, Gavin Ashenden. He recounts his reasons for becoming a Catholic for The Catholic Herald here. On EWTN's The World Over, he told Raymond Arroyo (via the National Catholic Register):

What does it mean to come to Catholicism the year of St. John Henry Newman’s canonization, a man whom I know had a huge influence on you, this decision, and your decision to convert to Catholicism?

Well it’s embarrassing because I identify with him very strongly. He was a giant and I’m a pygmy. But our journeys have been really similar in terms of the narrative. So for me, he’s charted the journey and I think back 30 years ago, I knew I’d have to take this journey sometime. I’m very grateful to him for making clear to me and to others what the issues are. For trailblazing a root back to Rome where we belong—the one true Church—where the fullness of faith is celebrated and the power of Christ is truly revealed.

The Catholic News Agency also adds this Newman connection, from the bishop who will receive Ashenden today into full communion with the Catholic Church, Bishop Mark Davies of Shrewsbury:

Bishop Davies commented that “it is very humbling to be able to receive a bishop of the Anglican tradition into full communion in the year of canonisation of St John Henry Newman.”

“I am conscious of the witness which Gavin Ashenden has given in the public square to the historic faith and values on which our society has been built. I pray that this witness will continue to be an encouragement to many,” he added.

I don't know what role, ordained or not, Mr. Ashenden will play in the Catholic Church in England after his reception today. He may find as many difficulties as St. John Henry Newman and Father George Rutler. As the late, great (to Mark and me) Monsignor William Carr always said, when you join the Catholic Church--or stay with her--you can't expect the Barque of Peter to be a gleaming, luxurious, well-provisioned ocean liner. It's a leaky boat, steered by sinners and saints. There will be rough seas ahead for sure! They come with the voyage.

But one note I find most fascinating is that his wife, Helen, became a Catholic two years ago! It would be interesting to learn more about her journey to Catholicism and why she crossed the Tiber before him.
Posted by Stephanie A. Mann at 12:00 AM