Being in Time with W.H. Auden 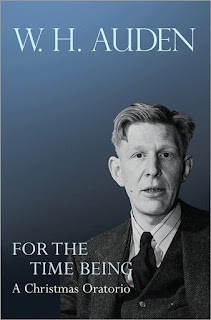 On Black Friday, the super shopping day after Thanksgiving, I did some online shopping and some real shopping (after Mass, at a Catholic gift/bookstore, with friends before lunch). But in the evening, I went to an event at the Eighth Day Institute's headquarters, The Ladder, and joined four good gentlemen in reading W.H. Auden's Christmas Oratorio, For the Time Being. Alan Jacobs edited and annotated the poem for Princeton University Press:

For the Time Being is a pivotal book in the career of one of the greatest poets of the twentieth century. W. H. Auden had recently moved to America, fallen in love with a young man to whom he considered himself married, rethought his entire poetic and intellectual equipment, and reclaimed the Christian faith of his childhood. Then, in short order, his relationship fell apart and his mother, to whom he was very close, died. In the midst of this period of personal crisis and intellectual remaking, he decided to write a poem about Christmas and to have it set to music by his friend Benjamin Britten. Applying for a Guggenheim grant, Auden explained that he understood the difficulty of writing something vivid and distinctive about that most clichéd of subjects, but welcomed the challenge. In the end, the poem proved too long and complex to be set by Britten, but in it we have a remarkably ambitious and poetically rich attempt to see Christmas in double focus: as a moment in the history of the Roman Empire and of Judaism, and as an ever-new and always contemporary event for the believer. For the Time Being is Auden’s only explicitly religious long poem, a technical tour de force, and a revelatory window into the poet’s personal and intellectual development. This edition provides the most accurate text of the poem, a detailed introduction by Alan Jacobs that explains its themes and sets the poem in its proper contexts, and thorough annotations of its references and allusions.

I was assigned the roles of Mary, Rachel, the Semi-Chorus, one of the Wise Men, the Chorus of Angels, and "Feeling"! The long soliloquy of King Herod, in prose, was hilariously Stoic!

The end of the poem offers the challenge of Advent and Christmas, to prepare and then be in that time being of anticipation and fulfillment that really only the liturgy and liturgical prayer provide: to be on the tip-toe of a great event and yet live in it in the midst of all the distractions and griefs and troubles. To keep Christmas--the Incarnation--in my heart everyday:

. . .To those who have seen
The Child, however dimly, however incredulously,
The Time Being is, in a sense, the most trying time of all.
For the innocent children who whispered so excitedly
Outside the locked door where they knew the presents to be
Grew up when it opened. Now, recollecting that moment
We can repress the joy, but the guilt remains conscious;
Remembering the stable where for once in our lives
Everything became a You and nothing was an It.
And craving the sensation but ignoring the cause,
We look round for something, no matter what, to inhibit
Our self-reflection, and the obvious thing for that purpose
Would be some great suffering. So, once we have met the Son,
We are tempted ever after to pray to the Father;
"Lead us into temptation and evil for our sake."
They will come, all right, don't worry; probably in a form
That we do not expect, and certainly with a force
More dreadful than we can imagine. In the meantime
There are bills to be paid, machines to keep in repair,
Irregular verbs to learn, the Time Being to redeem
From insignificance. The happy morning is over,
The night of agony still to come; the time is noon:
When the Spirit must practice his scales of rejoicing
Without even a hostile audience, and the Soul endure
A silence that is neither for nor against her faith
That God's Will will be done, That, in spite of her prayers,
God will cheat no one, not even the world of its triumph.

He is the Way.
Follow Him through the Land of Unlikeness;
You will see rare beasts, and have unique adventures.

He is the Truth.
Seek Him in the Kingdom of Anxiety;
You will come to a great city that has expected your return for years.

He is the Life.
Love Him in the World of the Flesh;
And at your marriage all its occasions shall dance for joy.

I say that the liturgy and prayer--especially liturgical prayer--are the best ways to be in that time because the Holy Sacrifice of the Mass makes the great mysteries of the Incarnation and the Paschal Sacrifice present to us NOW. As Joseph Cardinal Ratzinger wrote in The Spirit of the Liturgy, summarizing his argument at the end of an article, "The Relationship of the Liturgy to Time and Space":

When we look back on our reflections hitherto in this essay, we see that we twice encountered—in different contexts—a three-step process. The liturgy, as we saw, is characterized by a tension that is inherent in the historical Pasch of Jesus (his Cross and Resurrection) as the foundation of its reality. The ever-abiding form of the liturgy has been shaped in what is once and for all; and what is everlasting—the second step—enters into our present moment in the liturgical action and—the third step— wants to take hold of the worshipper’s life. The immediate event—the liturgy—makes sense and has a meaning for our lives only because it contains the other two dimensions. Past, present, and future interpenetrate and touch upon eternity. Earlier we became acquainted with the three stages of salvation history, which progresses, as the Church Fathers say, from shadow to image to reality. We saw that in our own time, the time of the Church, we were in the middle stage of the movement of history. The curtain of the Temple has been torn. Heaven has been opened up by the union of the man Jesus, and thus of all human existence, with the living God. But this new openness is only mediated by the signs of salvation. We need mediation. As yet we do not see the Lord ‘‘as he is’’. Now if we put the two three-part processes together—the historical and the liturgical—it becomes clear that the liturgy gives precise expression to this historical situation. It expresses the ‘‘between-ness’’ of the time of images, in which we now find ourselves. The theology of the liturgy is in a special way ‘‘symbolic theology,’’ a theology of symbols, which connects us to what is present but hidden.

In so saying, we finally discover the answer to the question with which we started. After the tearing of the Temple curtain and the opening up of the heart of God in the pierced heart of the Crucified, do we still need sacred space, sacred time, mediating symbols? Yes, we do need them, precisely so that, through the ‘‘image,’’ through the sign, we learn to see the openness of heaven. We need them to give us the capacity to know the mystery of God in the pierced heart of the Crucified. Christian liturgy is no longer replacement worship but the coming of the representative Redeemer to us, an entry into his representation that is an entry into reality itself. We do indeed participate in the heavenly liturgy, but this participation is mediated to us through earthly signs, which the Redeemer has shown to us as the place where his reality is to be found. In liturgical celebration there is a kind of turning around of exitus to reditus, of departure to return, of God’s descent to our ascent. The liturgy is the means by which earthly time is inserted into the time of Jesus Christ and into its present. It is the turning point in the process of redemption. The Shepherd takes the lost sheep onto his shoulders and carries it home.

We can't be in the time being with Jesus on our own: we need His love and His grace. In the Holy Sacrifice of Mass in Roman Rite or the Divine Liturgy of the Eastern Rites "earthly time is inserted into the time of Jesus Christ and into its present".

Blessed Advent to you all!
Posted by Stephanie A. Mann at 12:00 AM

Email ThisBlogThis!Share to TwitterShare to FacebookShare to Pinterest
Labels: A Christmas Oratorio, Advent, Eighth Day Institute, For the Time Being, Joseph Cardinal Ratzinger, reading out loud, The Ladder, The Spirit of the Liturgy, W.H. Auden