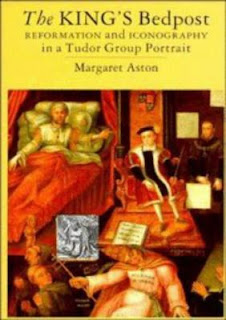 My ways of determining which books made this list were: 1) How much I enjoyed reading the book; 2) How much I learned from reading the book, especially as it added to knowledge I already had; 3) the author's skill in using sources and making an argument I could engage with; and 4) how well the book connected with other books I was reading or other events I was attending.

The late Margaret Aston took on Roy Strong's dating of the allegorical painting Edward VI and the Pope in this wonderfully illustrated and elegantly argued exploration of religious issues during Elizabeth I's reign. Aston does it with such good humour and careful explanation that I think that even Roy Strong wouldn't mind her suggestion that he was wrong to date this painting to the reign of Edward VI, even though it seems to depict events occurring while that new Josiah was on the throne and his Protectors and Council were implementing a truly Calvinist and iconoclastic Reformation in England.Much of Aston's evidence is graphic as she dates the sphinx-like bedpost at the bottom of Henry VIII's bed, and indeed Henry VIII's posture, including the hand on his knee and the pointing finger, by citing another image, created after both Edward and Mary I reigned, on the Continent by Peter Galle in 1564. Aston also found a drawing of the Fall of Babel dating to 1567 upon which the inset picture of the destruction of idols could be based. Those two models take the allegorical picture out of Edward VI's reign and into Elizabeth's reign. . . .

This is really masterful work, explaining many facets of the English Reformation through the analysis of an allegorical painting which is not really a great work of art but a fascinating image nonetheless.

Another royally titled book from November: 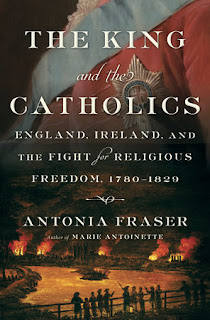 I certainly agree [with the publisher] that Fraser writes "character-driven narrative history": her profiles of historical figures from Lord George Gordon to Cardinal Consalvi, Bishop Milner to Daniel O'Connell, Maria Fitzherbert to Father John Lingard describe their contributions to the ongoing social, political, and Royal struggle to allow Catholics to practice their faith freely. Each chapter describes the proponents and opponents of Catholic Emancipation and the slow progress of Parliamentary efforts toward it. She begins with the Gordon Riots, continues with the situation of the Prince of Wales and Mrs. Fitzherbert (the heir to the throne married to a Catholic widow through a wedding not recognized by the State), King George III's breakdown, English sympathy for Catholic refugees from the French Revolution, Daniel O'Connell's efforts, etc. . . .

Fraser dedicates two-thirds of the book to the events and personages dealing with the cause of Catholic Emancipation in Ireland and in England. The last section details the final, reluctant assent of Sir Robert Peel, the Duke of Wellington, and King George IV to Catholic Emancipation after Daniel O'Connell had won a landslide election in County Clare. The remarkably horrid fear of Catholics--King George IV's brother, Ernest Augustus, the Duke of Cumberland (future King of Hanover) actually thought that Catholic Emancipation would mean that England would become a Catholic country with a Catholic government--when Catholics were such a minority in England (but not in Ireland!). . . .

So finally Catholic Emancipation was achieved, except that important supporters of O'Connell in Ireland were stripped of the vote when the property value limits were increased for freeholds from forty shilling to ten pounds, reducing the number of Catholic men who could vote. O'Connell regretted that part of the deal. He also had to stand for election again because the law didn't grandfather him in: under his original election, he still had to take an oath denying the Real Presence, etc.

Fraser rightly pays tribute to O'Connell's rhetoric eloquence and strategic brilliance: while not allowing any violence, especially after he had won election, Wellington's government knew there was a threat and the possibility of insurrection. He was one of the heroes of this effort. She also acknowledges Wellington's commitment and even Peel's change of mind. This is a great work of historical storytelling with important consequences. . . . 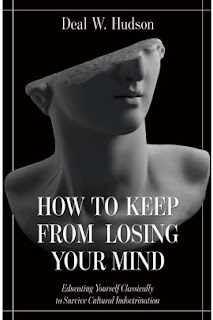 In August, I read this book by Deal W. Hudson in .pdf format before its release in September:

What Deal Hudson does in this book is help us teach ourselves--be autodidacts--about the classic works of literature, film, and music (adding the last two to the usual consideration of the Western Classical Tradition) and then help us maneuver in the world of social media, the mainstream mass media, and the progressive, anti-traditional cultural milieu we face--where we can lose our minds (and souls). He doesn't reject the internet, citing many sources, especially for musical compositions, that are on-line. Finally, he examines the Four Loves delineated by C.S. Lewis (Storge/Parental Love, Philia/Friendship, Eros, and Agape) and the classic works of literature, film, and music that depict them.
These three parts of the book reflect the three transcendentals that have always kept men and women from losing their minds: Beauty ("The Irresistible Canon"), Truth ("Bad Ideas in Motion"), and Goodness ("Love is the Crux"). Like the line from the Rilke poem in Chapter One, "You Must Change Your Life", the image on the cover depicts what great works of art mean to us and the roles they play in our lives: to challenge, inspire, and educate us: to see more than we have seen before. Hudson goes on to urge us to read or view or listen to works that don't immediately conform to our own comfort, that may be dark or tragic.

Before and after the Eighth Day Institute Florovsky-Newman Week in June, I read the next two books. 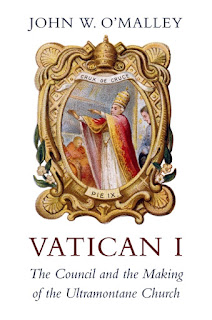 Father O'Malley devotes three of the five chapters to the background of the First Vatican Council, the first Church Council since Trent in the 16th century. He reviews the political and culture situation in Europe, especially in Italy, where the Pope's temporal authority over the Papal States and Rome was in danger in the drive for Italian unity and nationhood. He examines the relationship between Church and the nations in Europe, especially trends like Gallicanism,  Febronianism, and Josephinism through which the state or the ruler controlled education, formation of priests, selection of bishops, monastic and religious foundations, etc. O'Malley's survey in those three chapters thus begins in the eighteenth century, explores the grassroots origins of the Ultramontane movement--meaning grassroots from the laity, to the priesthood, to the academic world, and to the episcopacy--and the pontificate of Pope Pius IX (including the history of the treatment of the popes personally during the revolutionary movements of France and Italy). . . .

In his Conclusion Father O'Malley discusses the aftermath of the First Vatican Council, including, all too briefly I think, Newman's response to Gladstone's overreaction to Pastor Aeternus. In his interview with Deal Hudson, O'Malley opines that since the decree on the Assumption of the Blessed Virgin Mary, there has been no exercise of Papal Infallibility in matters of faith and morals. But the Church has been more centered on the role of the Pope in the everyday lives of Catholics, with Papal documents, speeches, travels, audiences, etc. One could also argue that the greatest event of the twentieth century for Catholics was the Second Vatican Council, which changed many aspects of daily Catholic life on the local, not Papal, level. Father O'Malley doesn't discuss this, but the long papacy of Pope Saint John Paul II also changed Catholics' view of the pope's role in our lives: his travels, his theological and philosophical influence, the saints he canonized, the reforms he instituted (Canon Law, the Catechism of the Catholic Church, World Youth Day, the Synods of Bishops, etc), his great project of the celebration of the Third Millennium of Christianity, have formed our image of what a pope should be and do.Father O'Malley is great historian and writer. He uses the sources well; writes succinctly and clearly; analyses cogently.Highly recommended: except that I think he should have dedicated a few paragraphs to show how Newman's response to Gladstone formed the mainline interpretation of Papal Infallibility and authority. 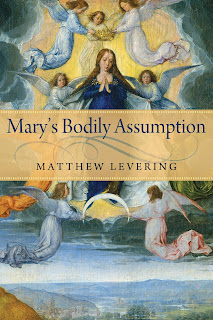 I appreciated Levering's method of exposition as outlined [by the publisher]. He limits his discussion to the 20th century, describing the teaching of the Catholic Church on the Assumption of the Blessed Virgin Mary, the different theological schools and how they explored the meaning this teaching--their speculative theology--and how in the case of Karl Rahner it led to correction by the Congregation for the Doctrine of the Faith. Not having read any of Joseph Ratzinger's speculative theology before, Levering's description of his work on the Assumption surprised me.His exploration of typological interpretation of the Holy Bible as practiced by three Protestant theologians, Richard B. Hays, Peter Ens, and Peter Leithart, seemed to balance exposition of their thoughts and his reaction to their limitations of biblical interpretation by the historical-critical method fairly.What I appreciated even more was Levering's references to two of Blessed John Henry Newman's Discourses to Mixed Congregations, "The Glories of Mary for the Sake of Her Son" and "The Fitness of the Glories of Mary", although I was surprised that he did not also include Newman's thoughts on Mary as the New Eve from the Letter to Pusey. Nevertheless, the last two chapters present an excellent argument for the Assumption of the Blessed Virgin Mary based first on "The Authority of the Church as Interpreter of Revelation" (Chapter 5) and then on "The Fittingness of Mary's Assumption in God's Economy of Salvation" (Chapter 6). . . .

Email ThisBlogThis!Share to TwitterShare to FacebookShare to Pinterest
Labels: Best Books of 2019, How to Keep From Losing Your Mind, Mary's Bodily Assumption, The King and the Catholics, The KING'S Bedpost, Vatican I