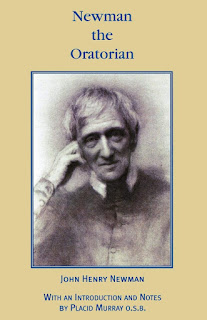 Last weekend at the Spiritual Life Center I mentioned how the Oratory movement that St. John Henry Newman had brought to England was flourishing as a new Oratory, in Manchester, had just been approved by Pope Francis. The Catholic Herald provided this update:

Less than a month after the canonisation of St John Henry Newman, England is to get its fourth oratory.

Pope Francis signed a decree on November 1, the Solemnity of All Saints, formally erecting the Manchester Oratory at St Chad’s parish in the Diocese of Salford.

The Oratorian community, which has been in formation in Manchester since 1992, will also oversee a prison and a hospital chaplaincy, as well as a Catholic primary school.

So that was the fourth Oratory. Please note that the fathers and brothers of the Manchester Oratory appear to have the assistance of Norfolk Terrier and a Border Terrier (scroll down to see the third picture on this post)!

Not long after that Oratory of St. Philip Neri was approved, another announcement, this time from York, on November 19:

It was announced today in Rome that our Holy Father Pope Francis has erected the Oratory-in-Formation in York as an independent Oratory of St Philip Neri. The decree of foundation is dated 9th November 2019, the Feast of the Dedication of the Lateran Basilica.

The York Oratory is the second Oratory to be founded in England in the last month with news of the Manchester Oratory coming at the beginning of November. There are now five Oratories in England, at Birmingham, London, Oxford, Manchester and York. There are Oratories-in-Formation in Cardiff and Bournemouth.

This news comes only a little more than a month since Pope Francis canonised St John Henry Newman who brought the Oratory of St Philip from Rome to Birmingham and London in 1848.

The York Oratory will also care for the shrine of St. Margaret Clitherow in York.

The website for the Oratory in Cincinnati, Ohio provides some information about why Pope Francis approved the formation of these new oratories:

The Congregation of the Oratory of St. Philip Neri is a “society of Apostolic life” founded under the guidance of the Confederation of the Oratory (based in Rome) and with the permission of the local Ordinary. The definitive foundation of an Oratorian Congregation is actually done by the Roman Pontiff directly, which makes a Congregation what is called a “Pontifical Right” foundation. An Oratory provides an opportunity for priests to live their vocation in a more structured community than what is typically experienced by diocesan priests, but with more flexibility than a religious order. Above all, it is a community of charity in the spirit of St. Philip Neri, the “Joyful Saint”.

The Oratorian resides in an Oratory community of his choosing and is permanently stable, i.e., he is not subject to transfer to other Oratories or communities. Nor does he take the vows of poverty, chastity or obedience, though the Oratorian seeks these perfections through voluntary observance.

The Oratorian vocation allows greater flexibility in pastoral work than a religious order and allows the priest to live in the same community without being periodically transferred by the local bishop. It is possible for an Oratorian to take up additional apostolates, or change his apostolate, at his own initiative and the discretion of the Oratory community, always guided by the local Ordinary. Oratorians are involved in ministries as diverse as schools, hospitals, prisons, university chaplaincies, seminary teaching, and work in curial offices in Rome. They also serve in traditional parish ministries.

*The London/Brompton Oratory is dedicated to the Immaculate Heart of Mary
**The Oxford Oratory, having previously been a Jesuit parish, is dedicated to St. Aloysius
Posted by Stephanie A. Mann at 12:00 AM