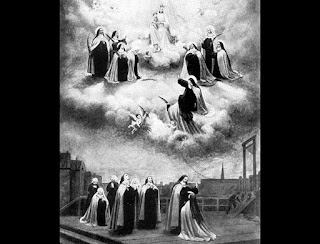 Last Wednesday, I recorded an interview for one of the Catholic News Agency's podcasts, the CNA Newsroom podcasts, which will be posted today. The producer, Kate Veik, asked me to talk about the Blessed Carmelite Martyrs of Compiegne with a focus on a "good death", based on my 2017 article about the Carmelites on the National Catholic Register blog page. The interview should be posted today and there are various ways (apps) you can listen to it!

The Carmelites obviously died "good deaths": they offered their martyrdoms for an end to the bloodshed, violence, and anti-Catholicism of the Reign of Terror; they were true to Jesus and His Church and the vows they had made as cloistered religious.

It was nine (9) years ago on November 16, 2010 that I visited the site of their martyrdom, the grounds of the cemetery in which their bodies were buried in mass graves, and got as close as I could to their graveside behind a wall and a locked gate.
Posted by Stephanie A. Mann at 12:00 AM