In honor of the last two days of Shrovetide, I'll be on the Son Rise Morning Show today and tomorrow to talk about Confession and Pancakes with Matt Swaim or Annie Mitchell. Today (live) at 7:50 a.m. Eastern/6:50 a.m. Central during the first of the two "local" Ohio/Kentucky hours and tomorrow (repeated) during the national EWTN hour (exact time TBD). Listen live here today and the repeat here tomorrow.
Lent starts Wednesday so there's just two more days for spiritual and practical preparation for the 40 days of fasting, praying, and almsgiving. Here is a good description of this season:


Shrove Tuesday is the last day of what traditionally was called "Shrovetide," the weeks preceding the beginning of Lent. The word itself, Shrovetide, is the English equivalent for "Carnival," which is derived from the Latin words carnem levare, meaning "to take away the flesh." (Note that in Germany, this period is called "Fasching," and in parts of the United States, particularly Louisiana, "Mardi Gras.") While this was seen as the last chance for merriment, and, unfortunately in some places, has resulted in excessive pleasure, Shrovetide was the time to cast off things of the flesh and to prepare spiritually for Lent.

Actually, the English term provides the best meaning for this period. "To shrive" meant to hear confessions. In the Anglo-Saxon "Ecclesiastical Institutes," recorded by Theodulphus and translated by Abbot Aelfric about AD 1000, Shrovetide was described--as follows: "In the week immediately before Lent everyone shall go to his confessor and confess his deeds and the confessor shall so shrive him as he then may hear by his deeds what he is to do in the way of penance." To highlight the point and motivate the people, special plays or masques were performed which portrayed the passion of our Lord or final judgment. Clearly, this Shrovetide preparation for Lent included the confessing of sin and the reception of absolution; as such, Lent then would become a time for penance and renewal of faith.

While this week of Shrovetide condoned the partaking of pleasures from which a person would abstain during Lent, Shrove Tuesday had a special significance in England. Pancakes were prepared and enjoyed, because in so doing a family depleted their eggs, milk, butter, and fat which were part of the Lenten fast. At this time, some areas of the Church abstained from all forms of meat and animal products, while others made exceptions for food like fish. For example, Pope St. Gregory (d. 604), writing to St. Augustine of Canterbury, issued the following rule: "We abstain from flesh, meat, and from all things that come from flesh, as milk, cheese, and eggs." These were the fasting rules governing the Church in England; hence, the eating of pancakes on Shrove Tuesday. 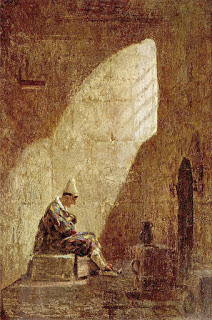 As Pieter Bruegel the Elder depicted in The Fight Between Carnival and Lent (above), we can get carried away with the possible excesses of Carnival/Fasching/Shrovetide/Mardi Gras--we don't want to incur sins of gluttony or drunkenness just before the season of penitence and repentance!! Otherwise, you could end up like the carnival goer in this painting: waking up in jail the next morning (Ash Wednesday) after sleeping it off!

Shrovetide seems to achieve the right balance: spiritually preparing for Lent with confession of sins and penance while practically getting ready for fasting and abstinence by using up what you won't be using any more from Ash Wednesday to Easter!


Here is a recipe for pancakes from the Tudor era: specifically, from The good Huswifes Handmaide for the Kitchin from 1588:

To make the pancakes:

Take new thicke Creame a pinte, four of five yolks of Egs, a good handful of flower, and two or three spoonfuls of ale, strain them altogether into a faire platter, and season it with a good handful of Sugar, a sooneful of Synamon and a little Ginger: then take a frying pan, and put in a little peece of Butter, as but as your thombe, and when it is molten browne, cast it out of your pan, and with a ladle put to the furthesr side of your pan some of your stuffe, and hole your pan aslope, so that you stuffe may run abroad all ouer all the pan, as thin as may be: then set it to the fyre, and let the fyre be verie soft, and when the one side is bakes, then turne the other, and bake them as dry as ye can without burning.

After one Tudor housewife starting making her pancakes, she heard the church bells ring and ran to church, carrying the frying pan with a pancake in it, still wearing her apron, and tying a scarf around her head--and that's how the tradition of Pancake Races began. Since 1950, ladies in Olney, England and Liberal, Kansas (USA) have competed in the International Pancake Day races!

On Friday, March 8, I'll prepare for our resumption of the series on Blessed John Henry Newman. The topic for Monday, March 11 on the Son Rise Morning Show is Conscience and Authority!
Posted by Stephanie A. Mann at 12:00 AM