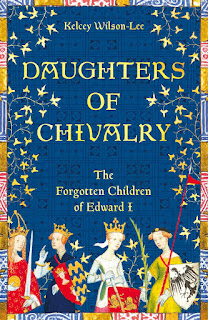 From The Literary Review, this review of a book coming out later this month, Daughters of Chivalry: The Forgotten Children of Edward I. Catherine Hanley likes the book (mostly):

Edward I and his first queen, Eleanor of Castile, were at the sharp end of medieval infant mortality statistics. Eleanor gave birth to at least fourteen children, only to see five of her daughters die in their first year and – perhaps even more agonisingly – three of her sons reach the ages of five, six and ten before they, too, perished.

The question of how parents dealt with such staggering loss has been the subject of much enquiry; of equal interest but less well researched is how the remaining children dealt with the loss of siblings, and how this affected their relationships with the other survivors. The career of Edward and Eleanor’s only surviving son, the future Edward II, is familiar, but, unsurprisingly, less is known of the five sisters who lived to adulthood: Eleanora, Joanna, Margaret, Mary and Elizabeth. Daughters of Chivalry is thus a welcome addition to the shelves of medieval history.

Hanley notices one gap in the comprehensive survey of the lives of these five women:

One conspicuous omission is an examination of the question of female succession. It is mentioned in passing that Eleanora was second in line to the throne, but more consideration could have been given to just how significant this was, particularly since the author is keen to stress throughout the book that medieval royal women had political duties as well as childbearing ones.

After the death of ten-year-old Alphonso in 1284, the sole surviving son was a four-month-old baby. Given the high rate of mortality among his children, Edward I was in danger of becoming the first English king for 150 years to die without a male heir (in the twelfth century the death of Henry I without a legitimate son had led to two decades of civil war). This left him with a critical decision to make, and in 1290 he decreed that if this eventuality came to pass, the crown would pass not to his brother, Edmund, but to his eldest daughter and her heirs. This enshrined the precedent of succession via the female line, which would have significant consequences for the English crown in years to come.

I don't think I've ever read about that precedent in any discussion of Henry VIII's decisions about the succession. Usually, the medieval precedent cited is Queen Matilda in the twelfth century (the crisis and civil war cited above after Henry I's death).

Edward must have felt confident that his daughter would be acceptable as a Queen Regnant--and he and his father Henry III had faced great rebellion among the barons and nobles of England (Simon de Montfort et al). Edward's beloved Queen Eleanor of Castile died in 1290--thus this decision about the succession--and he did not remarry until 1299. His second wife, Margaret of France, bore him two more sons (Thomas and Edmund), so the succession seemed more secure. Nevertheless, Edward I had made the decision in 1290 that if his only son Edward of Carnarvon died before he died, his daughter Eleanora would reign. Of course, Edward II did survive his father and that's another story.
Posted by Stephanie A. Mann at 12:30 AM

Email ThisBlogThis!Share to TwitterShare to FacebookShare to Pinterest
Labels: books, Daughters of Chivalry, Edward I, Edward II, Eleanora the Countess of Bar, Henry VIII, The Literary Review, the succession