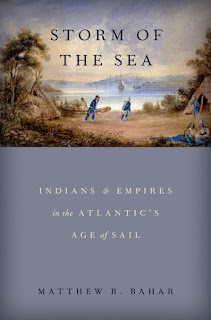 From The Catholic Herald, a review of a new book from OUP about the Wabanaki confederation of what is now north-eastern USA and south-eastern Canada, highlighting their desire to aid the Catholic Stuarts:

It was 1715 and a tribal people were preparing to assist in restoring Britain’s exiled Royal House of Stuart, sharpening tomahawks, covering themselves in war paint and raising sails on ships built to the highest technical standards of the day.

No, I haven’t been drinking too much Bourbon. Nor am I confusing Scottish highlanders, American Indians and Caribbean pirates. I am writing about a combination of two facts – the amassing of a fleet of sailing ships by the Indian tribes of the Wabanaki confederation, and the role which those tribes played in the Jacobite movement – facts which are virtually unknown but which can be studied in Matthew Bahar’s book, Storm of the Sea: Indians and Empires in the Atlantic’s Age of Sail. . . .

From the time they learned of the “Glorious Revolution” until the 1760s, the Wabanaki supported the claims of the Stuart dynasty, making them some of the last adherents of the Jacobite cause. It was a position which contributed to their cooperation with the Jacobites’ French allies in colonial campaigns during the War of the League of Augsburg, the War of the Spanish Succession and the War of the Austrian Succession – cooperation of greater strategic significance than might be readily apparent.

The more that Indian aid could minimise France’s need to send men and supplies to North America, the more resources France could spare for a Stuart restoration. Conversely, British victories in the colonies would divert French resources from Jacobite efforts. In 1745, for example, the French colonial fortress of Louisburg fell to a New England army. Had the fortress held out, the army and fleet which Louis XV sent to recapture it the following year would have been ordered to support Prince Charles Edward Stuart’s Jacobite rising, even if it meant setting out on such a mission after the Battle of Culloden.

The Wabanaki also contributed to bleeding dry the House of Hanover’s ability to make war. One of the major props of the power of Hanover was naval supremacy. The British navy’s most important source of timber for shipbuilding was the Wabanakis’ homeland. . . .

More from OUP about the book:

Narratives of cultural encounter in colonial North America often contrast traditional Indian coastal-dwellers and intrepid European seafarers. In Storm of the Sea, Matthew R. Bahar instead tells the forgotten history of Indian pirates hijacking European sailing ships on the rough waters of the north Atlantic and of an Indian navy pressing British seamen into its ranks.

From their earliest encounters with Europeans in the sixteenth century to the end of the Seven Years' War in 1763, the Wabanaki Indians of northern New England and the Canadian Maritimes fought to enhance their relationship with the ocean and the colonists it brought to their shores. This native maritime world clashed with the relentless efforts of Europeans to supplant it with one more amenable to their imperial designs. The Wabanaki fortified their longstanding dominion over the region's land- and seascape by co-opting European sailing technology and regularly plundering the waves of European ships, sailors, and cargo. Their campaign of sea and shore brought wealth, honor, and power to their confederacy while alienating colonial neighbors and thwarting English and French imperialism through devastating attacks. Their seaborne raids developed both a punitive and extractive character; they served at once as violent and honorable retribution for the destructive pressures of colonialism in Indian country and as a strategic enterprise to secure valuable plunder. Ashore, Indian diplomats engaged in shrewd transatlantic negotiations with imperial officials of French Acadia and New England.

Positioning Indians into the Age of Sail, Storm of the Sea offers an original perspective on Native American, imperial, and Atlantic history.
Posted by Stephanie A. Mann at 12:30 AM