Pope Francis at All Saints in Rome 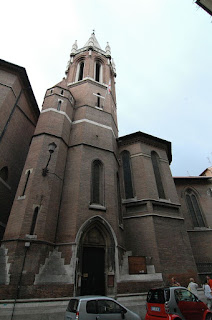 Pope Francis visited a parish church in Rome on Sunday--the Church of England parish, All Saints--for Evensong and the blessing of a new icon during the 200th anniversary year of the establishment of the parish. His remarks concluded with these statements of hope for the future:

As Catholics and Anglicans, we are humbly grateful that, after centuries of mutual mistrust, we are now able to recognize that the fruitful grace of Christ is at work also in others. We thank the Lord that among Christians the desire has grown for greater closeness, which is manifested in our praying together and in our common witness to the Gospel, above all in our various forms of service. At times, progress on our journey towards full communion may seem slow and uncertain, but today we can be encouraged by our gathering. For the first time, a Bishop of Rome is visiting your community. It is a grace and also a responsibility: the responsibility of strengthening our ties, to the praise of Christ, in service of the Gospel and of this city.

Let us encourage one another to become ever more faithful disciples of Jesus, always more liberated from our respective prejudices from the past and ever more desirous to pray for and with others. A good sign of this desire is the “twinning” taking place today between your parish of All Saints and All Saints Catholic parish. May the saints of every Christian confession, fully united in the Jerusalem above, open for us here below the way to all the possible paths of a fraternal and shared Christian journey. Where we are united in the name of Jesus, he is there (cf. Mt 18:20), and turning his merciful gaze towards us, he calls us to devote ourselves fully in the cause of unity and love. May the face of God shine upon you, your families and this entire community!

Here's a report on the visit from Vatican Radio. 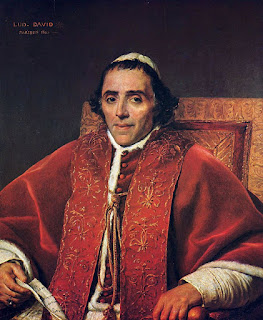 That was on 27th October 1816, within three weeks, the Sunday service was attracting between thirty and forty to his rooms, and at the request of the congregation he began to give a weekly sermon. Soon, people were being turned away for lack of space, and a larger, if still temporary, meeting place was created in spacious rooms near Trajan's Column. It was thought wise to ask for papal permission to conduct public worship in English, and Cardinal Consalvi, the Pope's Secretary of State, was approached. The reply, though icy by the standards of modern ecumenism, was taken as granting the request. Pope Pius VII is reported to have said,

Servant of God Pope Pius VII had been dealing with Napoleon Bonaparte for several years (1809 to 1814) and had returned to Rome from imprisonment and exile just a couple of years before.

Remember also that Catholics were only permitted to open churches or chapels in England in 1816, under the Roman Catholic Relief Act of 1791 with several restrictions: no steeple or bell, registration and certification at the Quarter Sessions (four times a year); no outdoor processions or prayers; the doors of the church or chapel had to be unlocked during Mass or whenever the congregation was present (open to search). Perhaps if Catholics had been more free to establish churches and chapels in England, Pope Pius VII would have been more "ecumenical"; perhaps the webmaster at the Anglican Centre should have been aware of these circumstances and how they might have contributed to what he thinks was the "icy" tone of the Pope's response.

Image credit (the exterior of the church). Portrait of Servant of God Pius VII by David.
Posted by Stephanie A. Mann at 12:30 AM