Another Victim of Titus Oates' Perjury 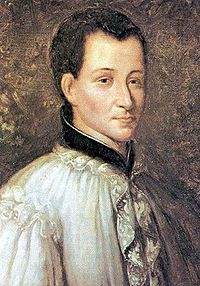 Today is the feast of St. Claude de la Colombiere, SJ who died on February 15, 1682. In a way, he is a victim of the Popish Plot, according to this biography published on the Jesuits in Britain website:

Claude found himself sent to England, to London where, seventy years after the Gunpowder Plot, there was still hostility to Catholics. Claude was sent to be Chaplain to the Duke and Duchess of York, both Catholics. The Duke was the younger brother and heir-presumptive of the reigning King Charles II; the Duchess, Mary of Modena, was a devout Catholic. As King James II & VIIth, he would become the last Catholic monarch of England, Scotland and Ireland until deposed in the “Glorious Revolution” of 1688. Charles II had granted the couple special permission to maintain a chapel in St. James’s Palace. English Jesuits were still, in those days, in considerable disarray and English Catholic priests would not have been permitted to occupy such a prominent posting. Fr Claude was given a modest apartment in the Palace and moved in on October 13th, 1676.

Fr Claude found it difficult from the beginning. That first London winter seems to have been severe. Perhaps imprudently, he would not hear of any extra heating in his sparse apartment. He admits to finding London cuisine inedible. Physical hardship was not the worst of his unhappiness. The morals of the Restoration era (broadly 1660 – 1710) were lax and louche, as the contemporary literary evidence shows. Claude was distressed by what he saw but he refused to harangue; instead, he returned again and again, in his preaching, to the Eucharistic love of Christ’s heart. Another biographer notes that “he breathed good will” and that there was “nothing of Savonarola about de la Colombiere”. Fr Claude’s spiritual diary of that time records an increasing devotion to St Francis de Sales; in Claude’s preaching we find a similar emphasis on the tenderness of God’s mercy, and an amazement at the contrast between God’s unlimited love and the boundless ingratitude that people show in return. This would surely have recalled, for Claude, those spiritual conversations and discernments in the Pray-le-Monial days.

Trouble lay ahead. Seventeenth-century London was an ambiguous place and not safe for Catholics, especially Jesuits. An entirely fictitious conspiracy, dreamt up by one Titus Oates, gripped both the English and Scottish kingdoms between 1678 and 1681. Catholics, it alleged, were plotting against the life of Charles II. The Jesuits in England were to carry out the “Popish Plot” (there had been a popular, hysterical assumption that the Great Fire of London in 1666 had been ignited by the Jesuits). Oates claimed to have attended a meeting, in a pub on The Strand, which discussed the Jesuits’ tactics. Caught up in this wave of frenzy, Claude was denounced by someone whom he thought he could trust. Imprisoned in November 1678 in an unheated filthy dungeon, he suffered a rapid deterioration in his health. Claude was charged with traitorous speech against the King and parliament. He was deported back to France and, seriously ill, slowly made his way back to Paray. There, his health broken and after one final meeting with St Margaret Mary, he died, 41 years old, on February 15th 1682.