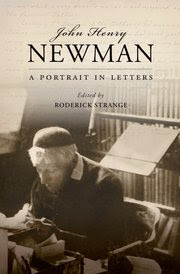 In John Henry Newman: A Portrait in Letters, Father Roderick Strange brilliantly distills Newman’s approximately 20,000 extant letters into a rich, revelatory selection, which covers every period of the great convert’s long life and gives readers a judicious view of the man’s pastoral counselling, controversies, and hard-won accomplishments, even though the latter, in a life riddled with failure, can often be seen only sub specie aeternitatis.

One reason why Father Strange has succeeded in his selection is that he has not sought to produce a “life in letters,” knowing that such an epistolary life could never capture the full complexity of his subject. Letters, after all, by their very nature—as Father Strange recognizes—do not lend themselves to a “smooth, rounded, complete narrative.” Moreover, if made to do the necessarily multi-faceted work of such a narrative, a selection of letters would inevitably risk being tendentious. Instead, Father Strange has sensibly chosen to make his selection a portrait of Newman, which may not make any claim to definitiveness, but nonetheless gives the reader a marvelously rich, evocative, critical sense of the charm, integrity, caritas, and genius of his fascinating subject.

Short focuses, for example, on one of Newman's controversies--from his Anglican period--the Bampton Lectures of Renn Dickson Hampden:

We should certainly keep Newman’s “unswerving” adherence to doctrinal integrity in mind when we read his letters to Renn Dickson Hampden, the Oriel fellow, with whose heterodox Bampton Lectures (1832) falsifying the Trinity and the Incarnation Newman took such spirited exception. “I dare not trust myself to put on paper my feelings about the principles contained in it,” Newman wrote of the pamphlet Hampden wrote as a follow-up to his lectures, “tending as they do in my opinion altogether to make shipwreck of Christian faith.” Hampden, a shy, reticent, retiring man, never altogether recovered from Newman’s principled attack, though he did what he could to defend himself. “I charge you with malignity,” the indignant don wrote in response to Newman’s accusations, “because you have no other ground of your assault on me but a fanatical persecuting spirit,” to which Newman replied, in the third-person, with comic formality: “He altogether disallows Dr. Hampden’s imputation that he has been guilty of dissimulation, and falsehood, and dark malignity.”

What is most significant about the Hampden controversy is how it reveals the unsparing polemicist in Newman. When it came to principles of doctrine, he never compromised. As he wrote one of his friends with regard to Hampden, “There is no doctrine, however sacred, which he does not scoff at—and in his Moral Philosophy he adopts the lowest and most groveling utilitarianism as the basis of Morals—he considers it is a sacred duty to live to this world—and that religion by itself injuriously absorbs the mind.” For Newman, the other fellows of Oriel might not be irreproachable, but they each had virtues to counterbalance their flaws. Hampden, on the other hand, as far as Newman could see, “judging by his writings, [was] the most lucre loving, earthly minded, unlovely person one ever set eyes on.” With an opponent as fierce as this, Hampden could be forgiven for deciding to spend most of his later career in his garden, far away from the brickbats of debate, only emerging briefly to oppose the heretical Essays and Reviews in 1860, by which time Newman had long since removed himself from the jousts of Anglicans.

The shelf of good books on Newman is small, but Father Roderick Strange’s John Henry Newman: A Portrait in Letters is a welcome addition to it. Those familiar with Newman and those unfamiliar with him will find it an altogether splendid read.

Read the entire review there.

With the volumes of letters now published, there could be a new Newman publishing industry, making the letters accessible by topic (even if there is no comprehensive index yet, as Short notes): like the book I read a couple of years ago on Newman's spiritual direction to friends and family, Edward Short's books on Newman--and I eagerly await the third--certainly belong on the shelf with Father Strange's book.
Posted by Stephanie A. Mann at 12:30 AM