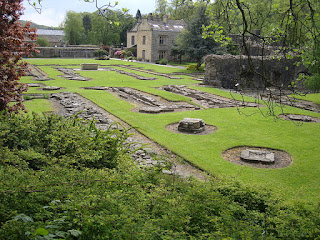 On March 10, 1536, Abbot John Paslew, the last abbot of Whalley Abbey was executed in Lancaster for his part in the Pilgrimage of Grace. According to the British History Online site entry for Whalley Abbey:

Little is known of the state of the abbey on the eve of the Dissolution. John Paslew, the last abbot, was afterwards accused of having sold much of the plate of the house to defray the cost of his assumption of the position of a mitred abbot and of a suit for licence to give 'bennet and collet' in the abbey. (fn. 96) A comparison of its accounts for the years 1478 and 1521 shows a large increase of expenditure in the latter year, especially in the items of meat and drink, though this may possibly have been due, in part at least, to an increase in the number of monks or to some exceptional hospitality. It is noteworthy that the income derived from the appropriated rectories in 1521 exhibits a more than proportionate augmentation. (fn. 97)

Only one of the monks was singled out for immorality by the visitors of 1535. (fn. 98) Cromwell subsequently relaxed in their favour the injunctions laid upon them by the visitors. Some restrictions on their movements were removed and only three divinity lectures a week were insisted on. (fn. 99)

In the autumn of the next year Abbot Paslew became implicated in the Pilgrimage of Grace. The abbey of Sawley, close by, was the centre of the movement in Craven and the adjoining parts of Lancashire. At the end of October, 1536, Nicholas Tempest, one of the Yorkshire leaders of the rising, came to Whalley with 400 men and swore the abbot and his brethren to the cause of the commons. (fn. 100) Paslew is alleged to have lent Tempest a horse and some plate; (fn. 101) Aske, however, said he had no money from the abbot as he had from other abbots and priors, but intended to have. (fn. 102) It may be that Paslew yielded reluctantly to the disaffection by which he was surrounded. A grant by the convent of a rent of £6 13s. 4d. to Cromwell on 1 January, 1537, perhaps marks an attempt to make their peace with the government. (fn. 103) But such offences as theirs were not overlooked. Yet as they were covered by the pardon granted in October there must have been subsequent offences. Shortly after Paslew sent a message to the abbot of Hailes that he was 'sore stopped and acrased.' His letter was intercepted and may have contained something incriminatory. (fn. 104) Doubtless he involved himself in the last phase of the 'Pilgrimage.' (fn. 105) He was tried at Lancaster and executed there on 10 March. (fn. 106) His fellow monk William Haydock shared his fate, but was sent to Whalley for execution. (fn. 107) The Earl of Sussex, royal commissioner with the Earl of Derby, wrote next day to Cromwell the accomplishment of the matter of Whalley was God's ordinance; else seeing my lord of Derby is steward of the house and so many gentlemen the abbot's fee'd men, it would have been hard to find anything against him in these parts. It will be a terror to corrupt minds hereafter. (fn. 108)

The possessions of the house were held to be forfeited by the abbot's attainder, and the king gave orders that as it had been so infected with treason all the monks should be transferred to other monasteries or to secular capacities. He wrote vaguely of a new establishment of the abbey 'as shalbe thought meet for the honour of God, our surety and the benefit of the county,' (fn. 109) but it remained in the hands of the crown until 6 June, 1553, when the site and the manor of Whalley were sold to John Braddyl (to whose custody they had been committed after the forfeiture and who had leased them since 12 April, 1543,) and Richard Assheton. (fn. 110) A partition was at once arranged by which Braddyl took most of the land and Assheton the house.

Abbot Paslew is not among the beatified or canonized martyrs of England. This website argues that Paslew was in some ways representative of the abuses of the monastic orders in England that Henry VIII and Cromwell wanted to eliminate, but the report of only one problem monk and the easing of any restrictions against the house seems to argue against that. His house was well-managed and orderly. The website also notes that Paslew refused the Oath of Supremacy, even if some now judge him as being a reluctant participant in the Pilgrimage of Grace:

Although participating very minimally (and arguably unwillingly) in the Pilgrimage of Grace, one cannot deny the admirable defence of his Catholic faith when it came down to it, as Paslew refused to take the compulsory oath of allegiance to Henry VIII and was executed, with two of his fellow monks, at Lancaster in March 1537. Here, when directly ordered, Paslew finally truly and admirably dissented-he refused to accept Henry as the Supreme Head of Church of England and thus stayed loyal to his faith and the pope. Despite all his faults, he dissented and died faithful to his religion.

If Abbot Paslew refused the Oath of Supremacy, he did more than the three beatified abbots of Glastonbury, Reading, and Colchester. The Reverend C.A. (Charles Alfred) Newdigate, SJ, Vice Postulator of the Cause of the English Martyrs at the time wrote in The Tablet on April 14, 1923, that there was a tradition of Paslew being a martyr for the faith, even in the recusant era, as Father Robert Parsons/Persons listed him as a Henrician martyr:

"For that divers godly, learned, and zealous men could not be content to follow the king's affections, as others did, & namely B. Fisher of Rochester, Syr Thomas More, late Chauncelor of England, . . . and other their like, they were content to give their bloud in defence of Cath. unitie against this schisme, as the Abbots of Glastenburie, of Whaley, of Redding, Doctor Forrest, . . . Doctor Powell, and the like." The Abbot of " Whaley " finds himself in good company, and Persons could scarcely have placed him there if he had not held him for a martyr in the highest sense of the word.

If we would know what Paslew's own Order thought of his death we may turn to his commemoration in Henriquez's "Menologium Cisterciense," 1629 :— "Beati Joannis Paslew, Abbatis Whallensis, qui post diuturnos carceres, variosque pro fide catholica toleratos labores, suspensus et in quatuor partes divisus Lancastriae martyrium consummavit." It may be that the historical facts here are somewhat at fault, but there is no mistaking the significance of the title Beati—a title which, it may be remarked parenthetically, would never have been tolerated had it been used after the decree against undue cultus issued only five years later by Urban VIII.

It's interesting to note that  Blessed Sebastian Newdigate, one of the Carthusian priors martyred in 1535 was a "collateral ancestor" of Father Newdigate, whose father Alfred had been an Anglican vicar before becoming a Catholic (with his family joining him) in 1875.

The grounds of Whalley Abbey are now a Church of England retreat center.
Posted by Stephanie A. Mann at 12:30 AM

Email ThisBlogThis!Share to TwitterShare to FacebookShare to Pinterest
Labels: Abbot John Paslew, causes of saints, Oath of Supremacy, Pilgrimage of Grace, The Dissolution of the Monasteries, Thomas Cromwell, Whalley Abbey