Father Rutler on the Parables 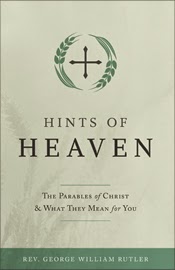 Father Rutler originally wrote these essays on the parables of Jesus in Crisis Magazine 13 years ago, so a diligent web researcher (like me) could find them on-line. In each of the 24 chapters of this book he examines one parable, applying its lesson to the Church today and providing hints of heaven to the individual reader. As he notes, the parables are ineffable and interpreting them is like explaining a joke or analyzing a poem: it can only partially make them applicable to us. It's rather we who need to apply ourselves to them to gain the hints of heaven and some understanding of God's way.

Sometimes the essay length, imposed I presume by the original publication medium, does not allow Father Rutler to examine certain parables in depth. I wanted to learn more about the parable of the Unjust Steward for example to help me understand why Jesus seems to be commending dishonesty and cheating. As Sophia Institute Press notes, Rutler boils the lesson of the parable down to this:

The Unjust Steward: The world is filled with evildoers. Are you mirroring the light of Christ?

Nevertheless, Father Rutler is always clear thinking and clear speaking. As he elucidates each parable he guides the reader deeper into the reality of the Church, the Communion of Saints, our miraculous balance of human and Divine. He reveals how often we get confused about them and muddle them up--accepting the human as perfection and expecting the Divine to accept imperfection.

My ears perked up during this paragraph from the essay on "The Hidden Tresasure" as my White West Highland Terrier kept asking me to pet his little head (bumping my hand whenever I stopped):

The pantheist may gloss over this: The treasure was in one particular field. It was not the germ of every field that ever was, nor was it the abstract fieldness of the field. Salvation, which is the treasure—and there I have given the parable away—is a particular thing in a particular place. So the Church, before she is apostolic, is catholic; and before she is catholic, she is holy, and before all else, she is one. This is easier to say when the naive and injurious adolescence of ecumenism has matured. Now that religions speak to one another, we can talk about what was formerly speakable only between coreligionists. The treasure of salvation is found in the Catholic Church, not because of any inherent righteousness of Catholics (we are always stumbling upon it) but because that is where God planted it. Knowing how upset sentimental people can become when thwarted, I had no qualms about allowing a parishioner to have her Highland terrier blessed in a non-Catholic church—in a ceremony that has virtually become a high feast in that denomination. But I still draw the line at blessing people. This is not because no one else may be able to do it but because I know the Catholic blessing definitely does it.

Rutler's right. While he can't make blessing pets into a high feast, he won't stop his parishioner from taking her Westie to the Cathedral Church of St. John the Divine for the annual event. As this news report proves his point, Father Rutler wants his church to look like a church, not a zoo. Especially when you find out later in the article: "And if you’re wondering where all the exotic animals came from, most belong to a company that rents them for movies and TV shows . . ." No animals were injured in the making of this production, but were any humans saved? As Father Rutler makes a clear distinction between the human and the animal, the Parables of Christ remind us of the distinction between the human and the Divine.

Please note that I purchased this book from Eighth Day Books. I was working at Eighth Day Books--while it was located in Clifton Square--when Father Rutler visited the store during a speaking engagement in Wichita.
Posted by Stephanie A. Mann at 12:30 AM