The 23rd of April: St. George, the Garter and King Charles II 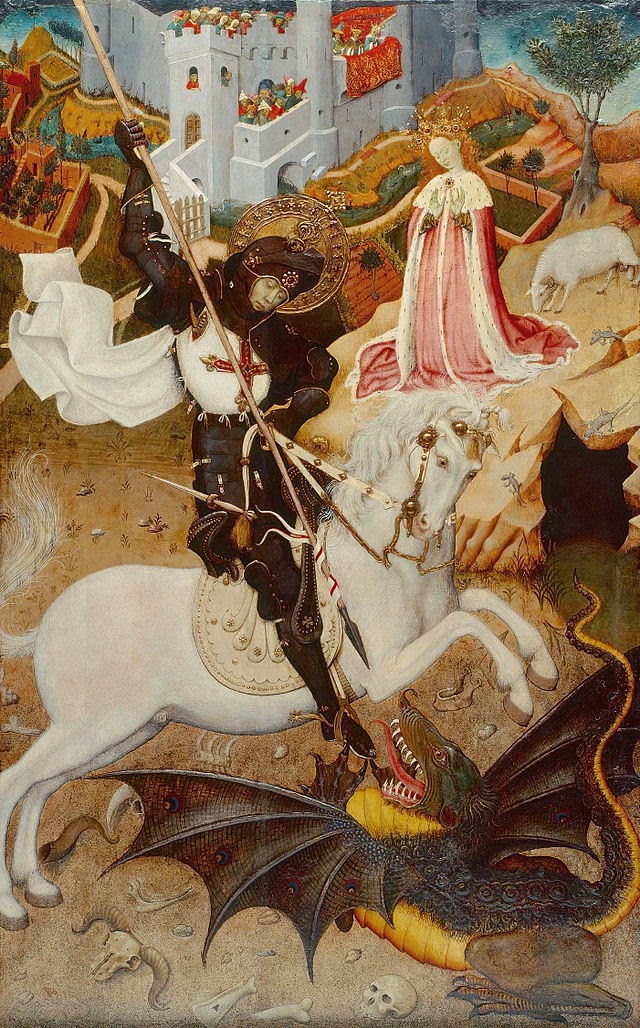 Today is the Feast of St. George, the martyr. It's also the anniversary date of the Order of the Garter (founded in 1348) and of the coronation of Charles II in 1661.

Pictures of St. George usually show him killing a dragon to rescue a beautiful lady. The dragon stands for wickedness. The lady stands for God's holy truth. St. George was a brave martyr who was victorious over the devil.

He was a soldier in the army of the Roman Emperor Diocletian, and he was one of the Emperor's favorite soldiers. Now Diocletian was a pagan and a bitter enemy to the Christians. He put to death every Christian he could find. George was a brave Christian, a real soldier of Christ. Without fear, he went to the Emperor and sternly scolded him for being so cruel. Then he gave up his position in the Roman army. For this he was tortured in many terrible ways and finally beheaded.

So boldly daring and so cheerful was St. George in declaring his Faith and in dying for it that Christians felt courage when they heard about it. Many songs and poems were written about this martyr. Soldiers, especially, have always been devoted to him.
Some information about the Garter:

The Order of the Garter is the most senior and the oldest British Order of Chivalry and was founded by Edward III in 1348.

The Order, consisting of the King and twenty-five knights, honours those who have held public office, who have contributed in a particular way to national life or who have served the Sovereign personally.

Here's a description of the Coronation by Samuel Pepys.

William Shakespeare in 1616 (this date is traditionally observed as his birthday too, based upon the record of his baptism);

William Wordsworth, the Romantic poet, 1880; and

Rupert Brooke, the WWI poet who did of sepsis in Greece, 1915.

Brooke's poem, "The Soldier" seems to sum up the patriotism of St. George's Day for England:

If I should die, think only this of me:
That there’s some corner of a foreign field
That is for ever England. There shall be
In that rich earth a richer dust concealed;
A dust whom England bore, shaped, made aware,
Gave, once, her flowers to love, her ways to roam;
A body of England’s, breathing English air,
Washed by the rivers, blest by suns of home.

And think, this heart, all evil shed away,
A pulse in the eternal mind, no less
Gives somewhere back the thoughts by England given;
Her sights and sounds; dreams happy as her day;
And laughter, learnt of friends; and gentleness,
In hearts at peace, under an English heaven.
Posted by Stephanie A. Mann at 12:30 AM