St. Philip Howard in the Tower of London 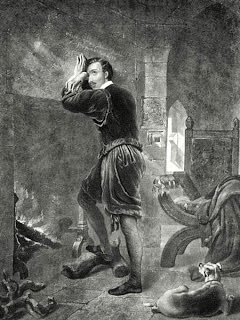 Today is the anniversary of St. Philip Howard's death in the Tower of London on Sunday of that year, October 19, 1595. He was canonized as a martyr saint by Pope Paul VI in 1970, along with 39 other martyrs, and in life, he was affected by two other martyrs: St. Edmund Campion, who influenced him without ever knowing it, I suppose, to return to his family's Catholic faith; and St. Robert Southwell, who served as Anne Howard's chaplain, and was also imprisoned in the Tower for a time. Reports are that St. Philip Howard's dog carried messages between them.

While in the Tower of London, as I mentioned yesterday on the Son Rise Morning Show, St. Philip Howard developed a tremendous regime of devotions, prayer, spiritual reading, and fasting/abstinence. He prayed the Divine Office, read the works of Louis of Granada, the Fathers of the Church (St. Jerome, for example), and Eusebius, whose history, he told St. Robert Southwell, was of comfort to him as it depicted the Church in "her infancy".

In 1588, when he was tried for having prayed for--specifically, having wanted a Mass offered in support of--the victory of the Spanish Armada, he began to fast three days a week: Monday, Wednesday, and Friday. According to the source I'm using, The Other Face, a collection made by Philip Caraman, SJ, he would ask his servant to eat any meat offered to him when he was abstaining from meat, so that the guards would not know!

Like St. Robert Southwell--and like many of the educated noblemen of his day--St. Philip Howard wrote poetry. The famous Lament for Walsingham is attributed to him:

Then, thou Prince of Walsingham,
Grant me to frame
Bitter plaints to rue thy wrong,
Bitter woe for thy name.

Bitter was it so to see
The seely sheep
Murdered by the ravenous wolves
While the shepherds did sleep.

Bitter was it, O to view
The sacred vine,
Whilst the gardeners played all close,
Rooted up by the swine.

Bitter, bitter, O to behold
The grass to grow
Where the walls of Walsingham
So stately did show. . . .

The magnificent book, Firmly I Believe and Truly: The Spiritual Tradition of Catholic England, also attributes another poem to him, "On the Joys of Heaven" while Father Caraman includes a poem titled "A Prisoner's Prayer" in his collection.

St. Philip Howard, pray for us!