. . . but Rossini's Otello was in our CD player this weekend, the digitally remastered version of Philips 1979 premiere recording with Jose Carreras, Frederica von Stade, and Samuel Ramey: 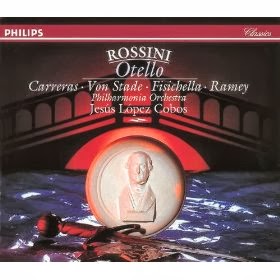 You do have to forget about Shakespeare's Othello, because as the liner notes in the CD state, Rossini's librettist turned the story into the usual tale of a secret marriage and animosity between rivals. Iago is not the great tempter of Otello, and Rodrigo has a much bigger role. Desdemona and Otello don't have any romantic duets at all--in fact, they sing only one duet and that is when Otello is preparing to kill Desdemona! This is not a tragedy, but an opera seria, and Rossini even wrote a comic--that is, happy--ending in which Otello and Desdemona are reconciled! (This recording ends with Otello killing Desdemona and then himself: no bacio, however.)

Here is the cover from the original LP release, which we also own: 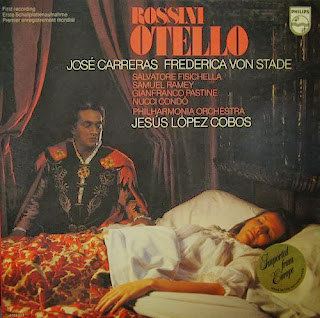 Carreras appears in makeup as the Moor on the cover and in the booklet, and von Stade is also pictured in makeup and costume in the booklet, while the other singers are photographed in the recording studio. There was no stage production before the recording, however, as there had been of Massenet's Werther before von Stade and Carreras recorded it (at Covent Garden in 1980). In both recordings, however, Frederica von Stade was singing in her prime and with great dramatic fervour and affect. Years later, von Stade sang the aria "Assisa a' piè d'un salice" (The Willow Song) at a gala, and the harpist who accompanied her posted this on her blog about the experience!
Posted by Stephanie A. Mann at 12:30 AM