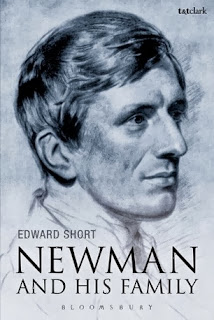 I am nearly finished reading Edward Short's Newman and His Family and have found it remarkably insightful. To think that the leading Anglican, then Catholic religious intellectual of his age would have had so little influence on his family's religious life is astounding. His two brothers would not even follow him so far as having faith in common Christian truths like the divinity of Jesus Christ, the incarnate, suffering, risen Savior of the world, and his sisters surely could not follow him into the "one fold of the Redeemer" as he called the Catholic Church. Short demonstrates how Newman's family (his father John, mother Jemima, brothers Frank and Charles, sisters Harriett, Jemima, and Mary) all influenced him in different ways--and he certainly influenced them, but not in religious matters to the extent that they would even accept or countenance his conversion to Catholicism, much less that they would become Catholic!

If he did not influence his family to accept Christian doctrine and the Catholic Church, he has influenced many hundreds of people in his own time and ours. Since his beatification in 2010, you can see his influence spreading even more widely, especially since he was chosen as the spiritual patron of the Anglican Ordinariate--he is the patron saint of Anglican converts to Catholicism. Here are just two examples:

We chose to continue as an Anglo-Catholic fellowship with Cardinal Newman as our Patron because he was a man who, from deep prayer and concentrated study, made a hard and costly journey from the Church of England to the Catholic Church in the mid 19th century. We identify with him because we too, as a former parish and as a present fellowship, have been on that path, making that journey.

We are people who have been led by God to spend years witnessing to “the faith once delivered to the saints,” and who have striven to “speak the truth in love” to the leaders of the Episcopal Church, whom we saw as being increasingly led by the spirit of the age, rather than being rooted in the revealed religion of historic Christianity and its sacred Tradition. This was a grave concern to us and for our children, and our children’s children.

The Fellowship of Blessed John Henry Newman has been founded as a community of Anglo-Catholic Christians who live in hope that their corporate vocation will ultimately be as part of the Personal Ordinariate of the Catholic Church.

It seems to me that the Fellowship is like Newman and his friends gathered in Littlemore at the College, praying and preparing for their future as Catholics!

Our future as a parish in Orange County revolves around two aspects: creating an Anglican Catholic community that nurtures, preserves, and grows our patrimony - which is ultimately the people - to help us on our way to heaven; and the second aspect is participating in the unity of Christians which Our Lord commanded (cf. St. John xvii). These are really two sides of the same coin. Our position as Anglicans in full communion with the Mother Church, who see Anglicanorum coetibus as the way for Anglicans to achieve the corporate unity our forefathers have longed sought, provides Bl. John's with a unique standpoint and capacity to participate in ecumenism in the Orange County area, both on a corporate level and to reach individuals. This necessarily requires Bl. John's to evangelize Orange County with the fullness of the gospel of Jesus Christ through his Church here on earth. Our committment to the Catholic faith and the Anglican patrimony leads us to not only reach out to other Anglicans and Episcopalians in our area, but also to Protestant Christians and to non-Christians.

Our intention is grow spiritually and numerically, and as we grow, invest time, energy, talent and finances into the lives of parishioners and the community around us. Not only do we hope and pray for a physical location of our own one day, but also we hope to develop one of the finest musical programs in Orange County. We take very seriously the adage attributed to St. Augustine, “To sing is to pray twice." Likewise we hope to develop a Catholic school in the Anglican tradition using Scripture, Tradition and Reason to form students in the classical tradition in the best of Western Civilization. These hopes for Bl. John's in the future arise from our patron, Blessed John Henry Newman, who himself desired this to be how parish churches should be modeled.

So this parish is like Newman and his friends, established at the Oratory, teaching, worshipping, and working in Birmingham!

Like so many others with special devotion to Blessed John Henry Newman, I pray for the day he is raised to altars as a canonized saint, this feast day is on the Roman Calendar, and Catholic parishes, both Anglican Rite and Roman Rite, may be dedicated to his name:

Eternal Father, You led John Henry Newman to follow the kindly light of Truth, and he obediently responded to your heavenly calls at any cost. As writer, preacher, counselor and educator, as pastor, Oratorian, and servant of the poor he labored to build up your Kingdom.

Grant that through your Vicar on Earth we may hear the words, 'Well done, thou good and faithful servant, enter into the company of the canonized saints'.

May you manifest your Servant's power of intercession by even extraordinary answers to the prayers of the faithful throughout the world. We pray particularly for our intentions in his name and in the name of Jesus Christ your Son our Lord.

UPDATE: Choral Vespers from Westminster Cathedral will be broadcast tonight on BBC 3! We'll be able to listen to the recording of the broadcast for a week at that site. According to The New Liturgical Movement, the musical selections are:

Email ThisBlogThis!Share to TwitterShare to FacebookShare to Pinterest
Labels: Blessed John Henry Newman, Edward Short, Newman and His Contemporaries, Newman and His Family