Newman and the Ordinariate 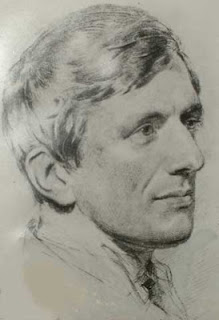 You might recall that Pope Benedict XVI called on the bishops of England and Wales to be generous in implementing the Personal Ordinariate for groups of former Anglicans on the last day of his visit in 2010. He also highlighted the newly beatified John Henry Newman as a model for understanding Faith in the context of the modern/postmodern/posthuman world: ("It was especially moving to celebrate with them, here in Birmingham, the beatification of a great son of England, Cardinal John Henry Newman. With his vast legacy of scholarly and spiritual writings, I am certain that he still has much to teach us about Christian living and witness amid the challenges of today’s world, challenges which he foresaw with such remarkable clarity.")

The author of new biography of Blessed John Henry Newman echoes Pope Benedict, according to CNA:

San Diego, Calif., Aug 14, 2012 / 04:10 am (CNA).- A biographer of Blessed John Henry Newman says the noted 19th-century Catholic convert can offer guidance to Anglicans in the midst of their denomination's current moral and doctrinal crisis.

Cardinal Newman “saw the importance of knowing one's faith, and the truths revealed by God through the Church – and the importance of living according to those truths, not according to opinions,” said Father Juan Velez, author of “Passion For Truth: The Life of Blessed John Henry Newman” (St. Benedict Press, $18.75).

While stressing the call to holiness for both laity and clergy, Newman also came to recognize the gift of the teaching authority held by the bishops in union with the Pope.

This visible apostolic authority contrasts sharply with the modern Anglican practice of “putting the beliefs of the Church up for a vote,” the biographer observed.

“Passion For Truth” is the first major biography of Bl. Newman to be published since his beatification in 2010. Its author discussed the late cardinal's life and thought in an Aug. 10 interview, two days after the biography became available as an e-book.

“A big part of the biography is the first part of Newman's life, his process of conversion,” explained Fr. Velez. During this time, “he had the question before him: 'What is the true Church? What is the fold of Christ?'”

Newman's life and writings, he noted, are “a source of continued help to those who are thinking about their Catholic faith – or thinking about becoming Catholics.”

The Victorian-era cardinal is a favorite of Pope Benedict XVI, who beatified him and has praised his contributions on topics like conscience and doctrinal development. Fr. Velez thinks it is “very likely” Bl. Newman eventually “will be canonized, and then made a Doctor of the Church.”

Why a new biography of Blessed Cardinal John Henry Newman? Perhaps because, as two disparate thinkers, William Golding (Lord of the Flies) and C.S. Lewis, believe, saints are the most interesting and unique kinds of people to read about. Tyrants, as Lewis wrote, are all boringly the same.

Another reason, for Father Juan Vélez, an Opus Dei priest, physician and Newman scholar, is “to highlight Newman’s constant search for religious truth and lasting happiness … to show the spiritual and intellectual path that led Newman from evangelical Protestantism through Anglicanism to Roman Catholicism.” The main source for his work is Newman’s correspondence, from which he quotes extensively. . . .

Father Vélez’s book describes Newman’s life and search thoroughly and with just enough historical and religious background to make it understandable for the lay reader. An added bonus is the selection of maps, prints and photographs of settings pertinent to Newman’s life.

Father Vélez’s presentation is at times plodding and rather obvious; Brother Zeno’s John Henry Newman: His Inner Life (1979) is much better written, and I’m surprised it’s not in the bibliography.

However, Passion for Truth, as Father Vélez intended, covers ground that Brother Zeno’s book did not and does it with the same passion as Newman had in his own search. It is a solid biography for someone who has never read about Newman before.
Posted by Stephanie A. Mann at 12:07 AM