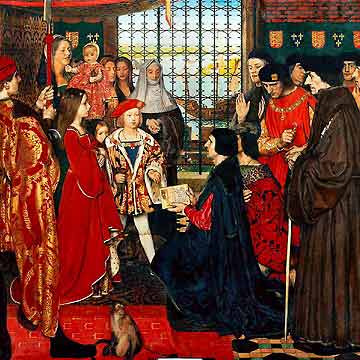 From Tea at Trianon comes this link to a painting by Frank Cadogan Cowper:

The painting shows the interior of the medieval palace of Greenwich: a man in black kneels before three small children in gorgeous apparel. Behind him and to the right, a tall manstands in profile, leaning on a stick. The story is a charming one, and it is true. Erasmus of Rotterdam was the most famous scholar of his day. In 1499 he was visiting England. He was in Greenwich one day with his young friend Thomas More, who made him an intriguing invitation.

"I prithee, bear me company to a certain great house nigh to here. There thou shalt find friends, who have a great desire to see thee." - More.

The house turned out to be the royal palace, and the 'friends' were the royal children. One of them was the future Henry VIII, who was eight years of age at the time. The infant prince promptly demanded that the great scholar should write them a poem - which he did.

Cowper was a pre-Raphaelite painter who specialized in historical scenes.

Tomorrow, when I talk about the Catholic Church in England before the Reformation on my Radio Maria program on "The English Reformation Today", I will be discussing the reforming efforts of St. Thomas More and St. John Fisher, the latter of whom invited Erasmus to come to England during a subsequent visit to teach Greek at Cambridge. The meeting depicted above took place during Erasmus' first visit:

Erasmus visited England for the first time in the summer of 1499. He came in the company of young William Blount, lord Mountjoy, who had been one of his pupils in Paris. He seems to have resided, for a while, in London with Sir William Say, his pupil’s father-in-law; then, at a country-house belonging to lord Mountjoy at Greenwich. He spent about two months at Oxford in the college of St. Mary, an establishment for students of the Augustinian order presided over by prior Richard Charnock. He was back in London in the beginning of December; and, after a round-about journey by Dover, Calais and Tournehem, he arrived in Paris sometime about the end of January, 1500. His visit had been short, lasting about six months, just long enough to make him acquainted with the most prominent scholars in England; and his correspondence enables us to judge of the progress which the classical renascence had made there.

In a letter to Robert Fisher, “the kyng’s solicitor at Rome,” he instances four scholars whom he cannot praise too highly—John Colet, William Grocyn, Thomas Linacre and Thomas More. These men had learning neither hackneyed nor trivial, but deep, accurate, ancient Latin and Greek.

"When I hear my Colet, I seem to be listening to Plato himself. In Grocyn, who does not marvel at such a perfect round of learning? What can be more acute, profound and delicate than the judgment of Linacre? What has nature ever created more gentle, more sweet, more happy than the genius of Thomas More? I need not go through the list. It is marvellous how general and abundant is the harvest of ancient learning in this country."

Erasmus admired the holiness of John Fisher's life, and there can have been few men that he respected more. In a letter to a priest in Rome in 1512 he wrote: "Unless I am sadly mistaken, he is the one man at this time who is incomparable for uprightness of life, for learning, and for greatness of soul." In 1516 Erasmus published his Novum lnstrumentum. This was the Greek text of the New Testament with Erasmus's own translation into Latin. This work was the cause of Fisher deciding to learn Greek at the age of forty-eight, and he had the good fortune to receive his first instruction from Erasmus himself; who stayed with the bishop in Rochester for ten days in the same year. Fisher then went on to learn Hebrew. The fact that he was able to gain a good working knowledge of these languages despite his time-consuming duties as bishop, chancellor, and counsellor to the king provides a striking indication of his tenacity of purpose.
Posted by Stephanie A. Mann at 12:12 AM