The Lady's Not for Hanging: Margaret Bulmer in Fiction and History 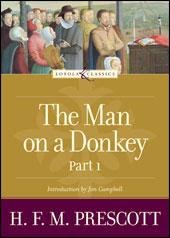 About a month ago I read Nancy Bilueau's debut novel, The Crown. At the beginning of the novel, set in the aftermath of the Pilgrimage of Grace and during the Dissolution of the Monasteries, "Joanna Stafford, a Dominican nun, learns that her favorite cousin has been condemned by Henry VIII to be burned at the stake. Defying the sacred rule of enclosure, Joanna leaves the priory to stand at her cousin’s side. Arrested for interfering with the king’s justice, Joanna, along with her father, is sent to the Tower of London." Joanna Stafford's cousin is none other than Lady Margaret Bulmer, the natural daughter of Edward Stafford, the Third Duke of Buckingham. Buckingham was accused of treason against Henry VIII and beheaded on May 17, 1521. Margaret Bulmer was sentenced to death for her part in the Pilgrimage of Grace and burned alive at Smithfield on May 27, 1537. Now that I am rereading H.F.M. Prescott's The Man on a Donkey as I said I ought to, I have met Margaret Stafford again and her little sister Julian. Prescott is indeed depicting Margaret as impulsive and obstinate. I wonder how or if Prescott will depict Margaret's fate?

Sharon L. Jackson wrote about Margaret (Cheyne) Bulmer in her Dangerous Talk and Strange Behavior: Women and Popular Resistance to the Reforms of Henry VIII. According to this review,

Margaret Cheyne's crime was to encourage her husband, Sir John Bulmer, to take part in the Pilgrimage of Grace against Henry VIII's Reformation and reforms. The rebellion built upon a combination of economic, social, political and religious resentments festering in the North of England. Witnesses attested that Margaret Cheyne had encouraged her husband to join the Pilgrimage of Grace and, fatally, to continue treasonous activities after the rebellion's failure in the autumn of 1536. She, herself, admitted that she incited Bulmer to resist the king. But was this a political decision, or, as Jansen herself suggests, the words of "a woman who wanted desperately to get out of the way of danger, not to plunge her husband or herself into it any further"? (p. 17). Jansen continues to undermine her case for Margaret Cheyne's political motivations. Little evidence survives documenting Margaret Cheyne's activities during the rebellion.[3] Her treason conviction appears to have been based upon the vague assertions of a few individuals. At the same time, other women, such as Lady Rhys, Lady Anne Hussey and Elizabeth Stapleton, took seemingly far more active roles in the rebellion yet escaped unscathed. But according to Jansen, Margaret Cheyne's parentage, combined with hostile relations with her in-laws, arguably left her dangerously vulnerable to the machinations of her enemies and accusers. Nevertheless, Jansen confidently declares that, "I would argue that Margaret Cheyne's presence among the rebels during the Pilgrimage of Grace was deliberate rather than accidental, her participation in the rebellion much more significant than historians have realized" (p. 34).

Henry VIII had pardoned the Bulmers after the Pilgrimage of Grace, but they were accused of treason and executed when another Northern rebellion arose. We usually think of people being burned alive in connection with "Bloody Mary" and her reign's efforts to stamp out heresy; however, being burned alive was the usual form of capital punishment for women found guilty of treason. The usual sentence for men convicted of treason was being drawn, hung and quartered, but since that sentence involved nudity, women were burned at the stake. Anne Boleyn was found guilty of treason and condemned to be burned at the stake. The monarch could commute either sentence to the more merciful beheading, but Henry did not show that mercy to Margaret Bulmer, as he did to Anne Boleyn. Women were also burned at the stake if they murdered their husbands or tampered with currency. Thus, to misquote Christopher Fry, the Lady's Not for Hanging.
Posted by Stephanie A. Mann at 2:12 AM

Email ThisBlogThis!Share to TwitterShare to FacebookShare to Pinterest
Labels: Burning at the Stake, Henry VIII, Margaret Bulmer, Pilgrimage of Grace, The Crown, The Man on a Donkey, Treason