The Supreme Head of the Church of England Abdicates in 1936 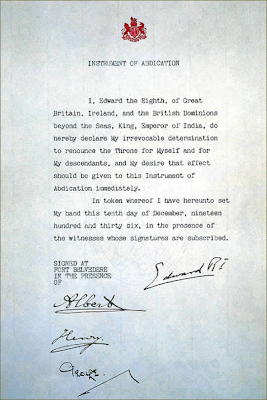 Yesterday was the 75th anniversary of King Edward VIII's abdication, as Once I Was a Clever Boy reminded us:

Seventy five years ago today there occured the abdication of King Edward VIII. At the time it was a profound shock to Britain and her Empire, and remains a subject of fascination, and an event with a continuing legacy for the monarchy.

Both Crown and subjects were fortunate in that King George VI and Queen Elizabeth were to prove so faithful and conscientious in the exercise of kingship, and to have transmitted that tradition to the Queen and through her to the next generations.

It is interesting that the current heir to the throne in England is in exactly the same position as Edward VIII was--married to a divorced woman with a surviving husband (Charles, the Prince of Wales was divorced from Diana before her death, of course). In the 1930's it was thought impossible for the Defender of the Faith and the Supreme Head of the Church of England to be married to a divorcee (TWICE divorced in the case of Wallis Simpson, in fact), but now it is no obstacle.
Posted by Stephanie A. Mann at 5:33 AM

Email ThisBlogThis!Share to TwitterShare to FacebookShare to Pinterest
Labels: Church of England, Defender of the Faith, Edward VIII, Elizabeth II