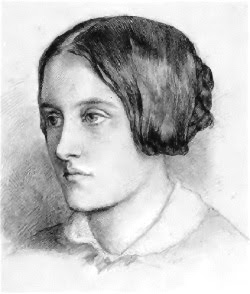 Christina Rossetti, the pre-Raphaelite poet and sister of Dante Gabriel Rossetti, one of the movement's founders, was born on December 5, 1830. She is best known for her book of poetry Goblin Market and Other Poems, published in 1862 and for two Christmas Carols: "In the Bleak Midwinter" and "Love Came Down at Christmas":

Worship we the Godhead,
Love Incarnate, Love Divine;
Worship we our Jesus:
But wherewith for sacred sign?

Love shall be our token,
Love shall be yours and love be mine,
Love to God and all men,
Love for plea and gift and sign.

She was engaged for a time to the artist James Collinson, who like her was an Anglo-Catholic--but then in 1850, they broke off the engagement when he became a Catholic. This site provides some background to the connections between the Pre-Raphaelite and Tractarian movements in Rossetti's poetry:

The resemblances between Rossetti's poem and Tractarian religious values have been convincingly enumerated and to some extent elaborated by Raymond Chapman, George B. Tennyson, and, in less detail, Georgina Battiscombe. Chapman observes Tractarian influence in the sacramental emphasis of those poems by Rossetti that literally or metaphorically employ motifs of baptism, communion, and marriage; and those that stress the value of virginity, the need for obedience, or the inevitability of guilt and the desirability of penitence. He remarks upon her concern with the self as individual, citing Newman's insistence that "God beholds [us] individually." Further, Chapman suggests a direct connection between Tractarianism and Rossetti's "attraction to the conventual life"; her veneration of St. Augustine; her interest in good works and social reform; her insistence upon self-sacrifice, self-denial, and self-abnegation; her uses of typological symbolism; and even her strong sense of heaven as a reality, a sense that is counterpointed by a Puseyite quest for "total union with Christ" (Faith and Revolt, 175-96, passim.). Tennyson similarly determines that Rossetti's uses of typology, nature imagery, and liturgical forms are characteristically Tractarian, as are her poems based upon the Church calendar, those inspired by acts of prayer, those that yearn. for oneness with God, and, finally, those that demon [68/69] strate the viability of poetry itself — as a mode of artistic discourse — in "seeking deity" (VDP, 200-203).

Such direct connections between Rossetti's art and Tractarianism become more convincing in light of the significant "hard" evidence that she was attracted to works by members of the Oxford Movement. Such evidence includes her elegiac sonnet on Newman (Works, 280); her possession of his Dream of Gerontius; and her hand-illustrated and underlined copy of The Christian Year by Keble. (8) Though, according to William Michael Rossetti, Christina "thought nothing of Keble as a poet" (Bell, 335), she clearly did admire the work of Isaac Williams, whom she quoted (on the value of auricular confession) to Dante Rossetti in a letter of 1881 (FL, 103), mentioned admiringly in her preface to Seek and Find, and remarked upon repeatedly in her letters. Also crucial in this connection is Rossetti's religious tutelage at the hands of the Revs. William Dodsworth and W J. E. Bennett, along with Canon Burrows, all of whom had close relations with Pusey and the Tractarian movement.
Posted by Stephanie A. Mann at 2:19 AM