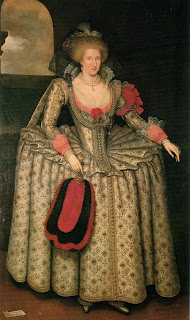 Anne of Denmark was born December 12, 1574 daughter of King Frederick II of Denmark and Norway. She married James VI of Scotland in 1589 when she was 15 years old.

Although they had eight children--only three of whom survived childhood--Anne and James grew apart. She became a Roman Catholic sometime in the 1590s and this created tensions in the marriage, especially when James succeeded Elizabeth I in England. Anne was crowned his Queen Consort, but she refused Anglican Communion. The King's male favorites may have also posed a problem for the couple.

At Court in England, Anne was found of masques--in which she often performed--and banquets. She was a great patron of the arts, sponsoring works by Inigo Jones, John Dowland, and Ben Jonson. In spite of their separation James was very moved when she died on March 2, 1619.
Posted by Stephanie A. Mann at 2:05 AM

Email ThisBlogThis!Share to TwitterShare to FacebookShare to Pinterest
Labels: Anne of Denmark, Catholic Queens of England, England, James VI and I, Scotland