A Rival to Madame Royale? 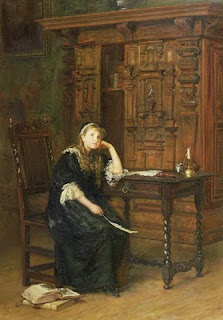 Princess Elizabeth, Charles I and Henrietta Maria's second daughter was born on December 28, 1635 and died imprisoned by Parliament on September 8, 1650. The portrait of her in the Palace of St. James by Millais depicts her as scholarly and young. As her father had in his youth, she had suffered from rickets and broke her leg at the age of seven. She was rather scholarly, learning Hebrew, Greek, Italian, Latin, and French. The princess was also known for her gentleness, with the nickname "Temperance."

She and her younger brother Henry were not allowed to join their mother and other siblings in Holland and France. She urged her older brother James to escape as soon as he could, lending him clothing to disguise himself. Elizabeth and Henry met with their father before his execution one last time and the princess wrote her recollection (she was 13; her brother 8):

He bid us tell my mother that his thoughts had never strayed from her, and that his love would be the same to the last. Withal, he commanded me and my brother to be obedient to her; and bid me send his blessing to the rest of my brothers and sisters, with communications to all his friends. Then, taking my brother Gloucester on his knee, he said, 'Sweetheart, now they will cut off thy father's head.' And Gloucester looking very intently upon him, he said again, "Heed, my child, what I say: they will cut off my head and perhaps make thee a king. But mark what I say. Thou must not be a king as long as thy brothers Charles and James do live; for they will cut off your brothers' heads when they can catch them, and cut off thy head too at the last, and therefore I charge you, do not be made a king by them.' At which my brother sighed deeply, and made answer: 'I will be torn in pieces first!' And these words, coming so unexpectedly from so young a child, rejoiced my father exceedingly. And his majesty spoke to him of the welfare of his soul, and to keep his religion, commanding him to fear God, and He would provide for him. Further, he commanded us all to forgive those people, but never to trust them; for they had been most false to him and those that gave them power, and he feared also to their own souls. And he desired me not to grieve for him, for he should die a martyr, and that he doubted not the Lord would settle his throne upon his son, and that we all should be happier than we could have expected to have been if he had lived; with many other things which at present I cannot remember.

He gave her a Bible and told her to read good Anglican books--and never to read any Catholic books!

After Charles' execution, the care of Elizabeth and Henry was a burden to Parliament. When Charles II claimed the throne 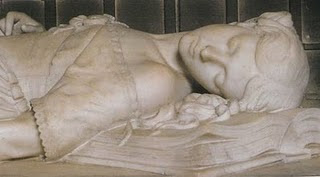 in Scotland, Elizabeth was moved as a hostage to the Isle of Wight, where she died of pneumonia at Carisbrooke Castle on September 8, 1630. Her grave in St. Thomas Church, Newport, was unmarked until the reign of Queen Victoria, who directed that a suitable tomb be erected for the sad young princess.

Carlo Marochetti carved her effigy, showing her head pillowed upon a Bible open to the Gospel of St. Matthew: "Come unto Me, all ye that labor and are heavy laden, and I will give you rest."

Above her effigy, the rest of the tomb depicts her imprisonment with an open grate that also reflects her final freedom, thr 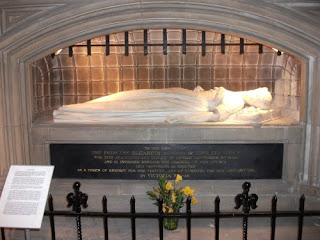 According to this blog, the Princess died with her head pillowed on the Bible her father had given to her and Parliament gave permission for her to join her family three days after she died.

Her story seems almost as sad as that of Marie-Therese, Madame Royale--perhaps more poignant and delicate.

Queen Victoria seems to have been interested in making sure the Stuart kings and princesses were taken care of in memory. In addition to this memorial, she had a hand in the side chapel dedicated to King James II in St. Germain-en-Laye. While we are currently so fascinated by the soap opera of the Tudor dynasty, the house of Hanover seems to have been influenced by the romance of the Stuarts. George III commissioned the monument to the Stuart Pretenders in St. Peter's in the Vatican, for another example.
Posted by Stephanie A. Mann at 2:04 AM