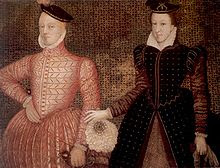 Henry Stuart, First Duke of Albany, Lord Darnley was the grandson of Margaret Tudor, dowager Queen of Scotland and her second husband Archibald Douglas. He was born on December 7, 1545. His mother was Margaret Douglas, whom Mary I thought had a better claim to the English throne than Mary's half-sister Elizabeth--since she was legitimate, and Mary firmly believed that Elizabeth was not.

The marriage of Henry Stuart to Mary, Queen of Scots strengthened the claim of both to reign in England, since they were first cousins tracing descent from Henry VIII's older sister Margaret--except that Henry VIII's will had diverted the succession from the Stuarts to the Greys. (You'll need to read Leanda le Lisle's book on the Grey sisters and how Elizabeth treated them to see how that worked out). Stuart was Mary's second husband as she was the widow of Francois II, briefly King of France. They were married on July 9, 1565 and Henry was proclaimed King of Scotland.
Their marriage and Darnley's title as King of Scotland were most displeasing to Elizabeth--for one of her subjects to become a foreign monarch was an insult. The marriage soon became displeasing to Mary too because Darnley not only caused dissension at Court but committeed horrific violence while Mary was pregnant, murdering her private secretary, David Rizzio in her presence. They may have reconciled briefly after the birth of their son James, but then Darnley was discovered murdered in the orchard at Kirk o Fields on February 10, 1567.
Mary's supposed guilt in his murder--and the disastrous marriage to the Earl of Bothwell--led to her fall from power in Scotland and imprisonment in England by Elizabeth I, who always recognized Mary's claim to succeed her if Elizabeth did not marry and produce an heir. Because Elizabeth never did marry and because Mary was a Catholic, the issue of the succession provided tension throughout much of Elizabeth's reign. Mary became the linch pin of plots to rescue her, depose Elizabeth and place Mary on the throne in Catholic circles--the Babington and Throckmorton plots, etc--that finally led to Mary's execution.
Alison Weir deals with the question of Mary's guilt in Darnley's murder in her book Mary, Queen of Scots and the Murder of Lord Darnley in which she pretty convincingly argues, in part, that Mary was framed through purposeful misreading of the so-called Casket Letters.
Posted by Stephanie A. Mann at 2:03 AM