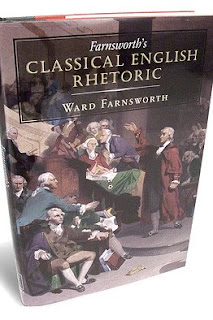 Since I am a student of rhetoric*, I read this review of Farnsworth's Classical English Rhetoric from Godine Books in the Wall Street Journal with interest. Then when I read how much Farnsworth appreciates Chesterton, my interest was really picqued!--to quote:

An incidental effect of Mr. Farnsworth's selection of examples is a kind of covert literary criticism. We are alerted to G.K. Chesterton's love of chiasmus—the ABBA pattern in which repetition involves reversal. Chesterton writes that "we do not get good laws to restrain bad people. We get good people to restrain bad laws" and that "an inconvenience is only an adventure wrongly considered; an adventure is an inconvenience rightly considered." According to Mr. Farnsworth, the device suited the author because "he believed that modern thought constantly had things backward."
and
He also seems keen to rehabilitate writers and speakers whose rhetorical artistry is undervalued; besides his liking for Chesterton, he shows deep admiration for the Irish statesman Henry Grattan (1746-1820), whose studied repetition of a word ("No lawyer can say so; because no lawyer could say so without forfeiting his character as a lawyer") is an instance, we are told, of conduplicatio. But more than anything Mr. Farnsworth wants to restore the reputation of rhetorical artistry per se, and the result is a handsome work of reference.
National Review likes it too.
*My master's thesis was on Hugh Blair's Lectures on Rhetoric and Belles-Lettres and Jane Austen's Persuasion and I read Cicero against Catiline in Latin III at Kapaun-Mt. Carmel High School!
Posted by Stephanie A. Mann at 2:08 AM