Anne Vaux and the Gunpowder Plot 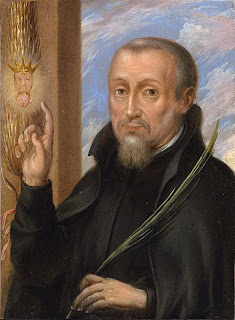 Speaking of the Gunpowder Plot in connection with Henry Garnet, SJ and the Bye Plot reminded me of Anne Vaux. According to the website published by the Houses of Parliament in 2005 to celebrate or commemorate the 400th anniversary of the discovery of the plot:

Anne Vaux was born in 1562, the daughter of a Catholic nobleman, Lord Vaux of Harrowden. She was a cousin of Francis Tresham. Unmarried, she seems to have devoted her life to supporting the cause of Catholicism in England and for many years she helped the Jesuit priest Henry Garnett to carry out his secret missionary work.

Working often with her widowed sister, Eleanor Brooksby, she created safe houses for Garnett and other clerics. One of them was Baddesley Clinton in Warwickshire, now belonging to the National Trust; another was White Webbs in Enfield Chase, near London. Both houses were fitted up with priest holes or hiding places for the priests.

Several of the conspirators met at White Webbs in the summer and autumn of 1605, and although she did not know about the Plot, Anne Vaux did have some suspicions. After the discovery of the Plot she was arrested but soon released, and following her release tried to protect Garnett, posing as his sister, a Mrs Perkins. By the beginning of December Garnett was in hiding at Hindlip House, where he was eventually found on 27 January.

After his arrest, Anne Vaux followed Garnett to London and tried to pass secret messages to him, which were intercepted by the authorities. She was herself arrested again in March and interrogated. Distraught at Garnett's death, she was released in August and lived first in Leicestershire and then in Derbyshire, where she ran a Catholic school. She died some time after 1637.

Of Garnet, the same site notes:

Henry Garnett was born in 1555, and went to Winchester College, where he was said to be a brilliant scholar. He probably left in 1571 for religious reasons and in 1575 left England to join the Jesuit order.

Ordained in about 1582 in Rome, in 1586 he travelled back to England with a fellow Jesuit, Robert Southwell. Garnett soon made contact with other Jesuits in England, including Weston, their leader. He also met the Vaux family soon after his arrival, who were to be his protectors for the next twenty years.

Following Weston's arrest, Garnett succeeded him as superior of the Jesuit order. Thanks to the Vauxes, especially Anne, Garnett evaded arrest for twenty years, during which many of his colleagues, including Southwell, were caught and executed. During the 1590s he had to try to sort out increasingly bitter disputes between the Jesuits and other Catholic clergy in England.
Garnett hoped for a more liberal attitude towards the Catholics from James I. Though disappointed in his hopes, he followed his instructions from Rome to do as much as he could to prevent plots against the King. Garnett knew many of those involved in the Plot very well and was aware of their determination to do something.

He first learnt about the Plot in late July 1605, when a fellow priest, Oswald Tesimond, explained to him (with Catesby's agreement) what he had been told in the confessional by Robert Catesby, so that they could discuss between them the issues of conscience that it involved. Whether Tesimond's discussion with Garnett had itself been a confession was an important point much discussed later.

Garnett tried to stop the conspirators, but did not reveal what he knew to the authorities. By October he may have thought that the plans had been abandoned. He first heard of its discovery at Coughton Court, in Warwickshire, the home of the Throckmorton family, in a letter from Robert Catesby on 6 November. He went into hiding immediately and was eventually captured in January 27th 1606. His trial took place on 28 March and he was executed on 3 May.

Many Catholics regarded Garnett as a martyr. A piece of straw taken from the scaffold on which he was executed was said to have miraculously acquired his image, and was venerated as a relic. A process of canonisation as a saint was begun but was never completed.
Posted by Stephanie A. Mann at 2:15 AM