Supreme Head and Governor of the Church in England 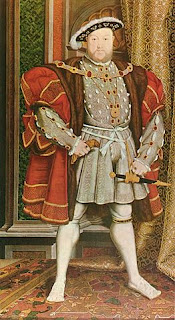 On Friday this week, Son Rise Morning Show host Brian Patrick and I will discuss the events of July 30, 1540, when Henry VIII demonstrated yet again the consequences of Parliament and the Convocation of Bishops naming him Supreme Head and Governor of the Church in England.

The Convocation of Bishops tried to put some limitation on the authority that gave him by adding the phrase "as far as Christ allows", but essentially both bodies had given Henry VIII tremendous power, which Henry wielded with ease. This was a Supreme Head and Governor who would punish both Catholics and Protestants: Catholics when they refused to swear his Oaths of Supremacy and Succession; Protestants when they refused to follow the religious doctrines he required, like Transubstantiation and the Real Presence of Jesus Christ in the Eucharist.

David Starkey has even called him a tyrant in his BBC 4 series "Henry VIII: The Mind of a Tyrant" and the events of July 30, 1540, which I'll describe in my blog post that day and on the Son Rise Morning Show certainly reveal his tyranny and his strange consistency of upholding his supremacy in matters of religion.
Posted by Stephanie A. Mann at 6:05 AM