A Matter of Dates: Commemorating the Battle of the Boyne 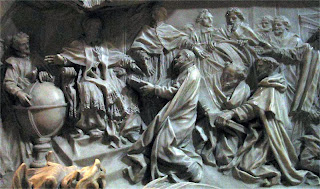 At the time of the Glorious Revolution, England was still on the Julian Calendar. The Catholic world had made the transition to the Gregorian Calendar after Pope Gregory XIII proclaimed it on February 24, 1582. It was a scientific adjustment with a religious purpose: the correct celebration of the date of Easter according to the First Council of Nicaea. Protestant Europe refused to accept the reform of the calendar. Elizabeth I was on the throne in England and distribution of the Papal Bull ordering adoption of the new calendar was indeed illegal at that time. So the religious divisions in Europe affected not only what date it was but what date Easter was each year.

Thus, according to the Julian Calendar, the Battle of the Boyne occurred on July 1, 1690, while according to the Gregorian Calendar, it occurred on July 12, 1690. England did not adopt the Gregorian Calendar until 1752, at which time the people of England seemed to "lose" eleven days, going to bed on September 2, 1752 and waking up the next morning on September 13, 1752. The Gregorian Calendar is now the internationally accepted calendar dating system, although it still requires adjustment.
Celebrating the date of the Battle of the Boyne in Northern Ireland as the Orange Order does on July 12 is an example of proleptic adjustment to the international standard. Remember that I'm on the air early tomorrow morning (6:45 a.m. Central/7:45 a.m. Eastern) on the Son Rise Morning Show to discuss the Stuarts and Catholics in England during their reign.
Posted by Stephanie A. Mann at 5:40 AM