The Duke of Richmond 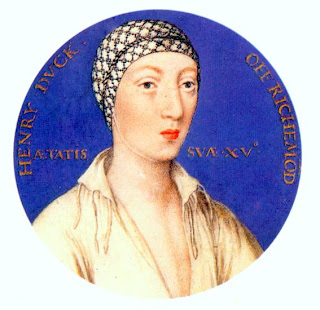 Henry VIII's illegitimate son Henry Fitzroy died on July 23, 1536. He was Henry's son by Elizabeth Blount, born in 1519 and Henry had bestowed many honors and much wealth upon him: the Order of the Garter; titles such as the Earl of Nottingham, Duke of Richmond and Somerset, Admiral of England, Ireland, and Normandy, and Lord Lieutenant of Ireland--these offices and titles made him very rich. His birth and survival was a sign to Henry that it was not his fault none of the sons borne by Katherine of Aragon survived.

In 1533 he married Mary Howard, daughter of Thomas Howard, the Duke of Norfolk. Henry Fitzroy died just when Henry VIII was considering naming him his heir, in spite of his illegitimacy, since he had no other son to succeed him. Fitzroy witnessed the executions of the Carthusians and of Anne Boleyn; we have no information about what he thought of the religious changes going on around him, although his wife was an evangelical reformer.
The Duke of Richmond's death, said by contemporaries to have been by consumption, at age 17/18 has provoked some wonder if he, Prince Arthur, Henry VIII's older brother, and Edward VI, Henry's son, all shared some congenital disease.
Posted by Stephanie A. Mann at 5:21 AM