The French Revolution and English Catholics 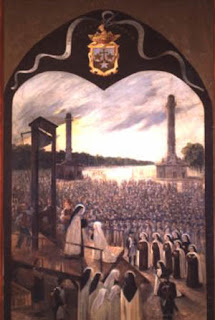 Yesterday, July 16, was the feast of Our Lady of Mount Carmel; today is the memorial of the Carmelite martyrs of Compiegne, victims of the Committee for Public Safety and French Revolution who were executed in Paris in 1794.

The exiled French priests and nuns who fled the Civil Constitution of the Clergy and the dangers of the Terror provoked feelings of sympathy in England. The fact that they were allowed to practice their faith while English Catholics were not contributed to the Catholic Relief movement in Parliament. I saw a sign of that sympathy last summer when my Oxford Movement class visited Dorchester Abbey, which had been a Tractarian church in the 19th century, and had been saved from destruction during the Dissolution of the Monasteries by a local gentleman paying Henry VIII off.

There was a memorial to Monsignor Michael Thoumin Desvalpons, an archdeacon and the Vicar-General of Dol in Normandy, who is buried in the south-west aisle of the Abbey church. He had lived in the household of William Davey at Overy, near Dorchester after fleeing France. The Davey family was the Catholic family that contributed much not only to the Catholics in the area, but the entire Dorchester-on-Thames community.
The memorial, carved in the floor, reads:
To the Memory of the Rev.
Michael Thoumin DesValpons
Aged 62
DD & CL Arch Deacon and Vicar-
General of Dol in Brittany
A man conspicuous for his Deep
Knowledge and his Moral Virtues.
Exiled since 1792 for his Religion
and his King, favorably Received
by the English Nation.
Deceased at Overy, March 2, 1798
greatly indebted to the Family of
Mr. Davey and Interred in this
Church at the Request and Expence (sic)
of the Revd. Dr. Guantelett, Warden
of New College, Oxon.
R.I.P.
Dorchester Abbey hosts a small Church of England community; St. Birinius, the Catholic Church across the street, evidently sometimes uses the C of E parish church for special events, like a funeral Mass, in the Extraordinary Form of the Latin Rite, for Mary Berry, Gregorian chant specialist.
One irony of the pattern of exile of the religious who fled France--some of them came from houses that had been established on the Continent for English religious after the Dissolution of the Monasteries.
Posted by Stephanie A. Mann at 5:22 AM