How English Catholic Historians Wrote About the English Reformation 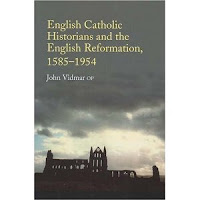 I recently posted a review on Amazon.com of Father John Vidmar's very specialized book, English Catholic Historians and the English Reformation, 1585-1954. I've also enjoyed corresponding with the author, who is on the Theology faculty at Providence College. Here is my review.
The historiography of the English Reformation has developed tremendously the last 30 years or so. Father Vidmar gives us a glimpse of the Catholic antecedents to the revisionist history of Duffy, Haigh, Bossy, (even myself) and others. Beginning with the clash between the Jesuits and the Appellants during Elizabeth I's reign, he also reveals how Catholics differed in their interpretation of the English Reformation. John Lingard, who wrote during the period leading up to Catholic Emancipation in 1829, was a more disciplined historian, using primary sources and interpreting them carefully, but even he displayed some of the disagreement between different parties in the Church, Cisalpine or Ultramontane. Vidmar also reveals developing Catholic views of crucial issues in English Reformation History: the role of Archbishop Cranmer, Papal authority, and Catholic appreciation of the Middle Ages and monasticism. In the latter, Catholic historians were contradicting the prevailing English prejudice against the "dark ages" as Pugin and others emphasized the cultural accomplishments of that era. He examines the efforts of Hilaire Belloc and even the fiction of Robert Hugh Benson in defending the spiritual authority of the pope. Vidmar's survey of English Catholic historians culminates in the work of Philip Hughes. A fascinating and specialized study.
Contents: Introduction: History and Religion 1. Exiles and Appellants 2. The Quest for Catholic Emancipation 3. John Lingard and the Cause of Catholicism 4. The Jesuits and Mark Tierney 5. The Restoration of the Middle Ages and Monasticism 6. Archbishop Cranmer and the Anglican Liturgy 7. The Church of England and the Papacy Conclusion Notes Bibliography (EXCELLENT) Index
Posted by Stephanie A. Mann at 4:17 PM