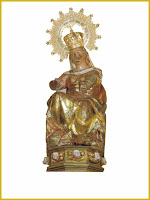 Last week there was a story about Pope Benedict XVI blessing the damaged head of the statue that survived the atomic bomb at Nagasaki. The body of the wooden statue was destroyed in Urakami Cathedral, but the head was found in the ruins.

It reminded me of the damaged statue of Our Lady in the English College at Valladolid, Spain, called Our Lady Vulnerata. English pirates under Essex and Raleigh who captured the Spanish town of Cadiz in the aftermath of the Spanish Armada desecrated this statue, chopping off the arms and the body of the infant Jesus on her lap. The face of the statue was also cut and damaged. The Countess of Santa Gadea donated the statue to the students at the English College, who promised to pray in reparation for the actions of their fellow Englishmen.

The first chapter of Catholic Culture in Early Modern England, a collection of essays from the University of Notre Dame Press edited by Ronald Corthell, Francis E. Dolan, Christopher Highley, and Arthur E. Marotti, is titled “Recusant Catholic Spaces in Early Modern England.” The author, Peter Davidson, examines the Vulnerata and the chapel in the Venerable English College in Rome in the context of the exile and danger English Catholics endured during the Elizabethan era. He comments that the focus on this image of Mary in the chapel at Valladolid is significant, as England had popularly been known as “Mary’s Dowry” and yet men from England had violently desecrated her statue. The English Catholics in exile had this image, and the paintings depicting the events of its damage, before them as a reminder of how their country had changed, how they suffered in exile, and how they might suffer if and when they returned home where their faith was proscribed and their vocation illegal.
Posted by Stephanie A. Mann at 5:36 AM