From Douai to Chelsea 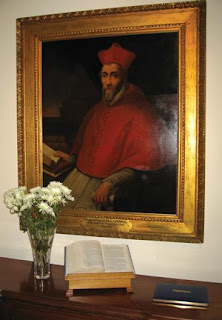 When English Catholic men went into exile to study for the priesthood during Elizabeth I’s reign, the first seminary set up for them on the continent was Douai, established in 1568 by William Allen, formerly of Oriel College at the University of Oxford. At that time, Douai was part of Flanders; now it is in France. The Catholic Archdiocese of Westminster in England recounts Allen’s biography and his efforts to establish the Venerable English College in Rome as well as the translation of the Holy Scriptures into English (which King James I’s translators would borrow from for the Authorized Version in England)—the Douai-Rheims translation.

Cardinal Allen, as he was honored in 1587, also had rather controversial roles in the excommunication of Elizabeth I in 1570 and the organization of the Spanish Armada in 1588. Pope St. Pius V’s bull Regnans in Exclesis not only excommunicated Elizabeth but also released English Catholics from their obligations to be loyal to her as Queen of England. The result of this bull, coming too late for the Northern Rebellions of 1569-1570, led to greater persecution of Catholics in England. Hoping for the successful invasion of England by the Spanish, Allen was to become the Archbishop of Canterbury and Chancellor. The majority of Catholics in England were loyal to their country during this invasion, but several priests and at least one layman, Philip Howard, suffered execution in its aftermath. When the Armada failed, he became Librarian of the Vatican and worked to found the English College in Spain. He died in Rome on October 16, 1594.

The English College in Douai was suppressed during the French Revolution in 1793, and the seminarians moved to England, where sympathy for the sufferings of French Catholic priests and nuns contributed to the notion of toleration for Catholics in England. The seminary founded in Douai is now in Chelsea where St. Thomas More established his Great House. The Archdiocese includes on their liturgical calendar the October 29 Memorial of the Blessed Martyrs of Douai College, beatified in 1929 by Pope Pius XI.
Posted by Stephanie A. Mann at 12:22 PM