Book Review: Lisa McClain's "Lest We Be Damned" 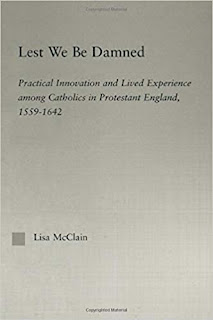 Clearly, I did not buy this book based on its cover!

From Routledge, Lest We Be Damned: Practical Innovation & Lived Experience Among Catholics in Protestant England, 1559–1642 was written by Lisa McClain. She is an "Assistant Professor of History and Director of Women's Studies at Boise State University. She studies popular religion during the Reformation era, and has authored articles in journals such as the Sixteenth Century Journal and the Journal of Religious History", according to Routledge. As the publisher blurbs the book:

Through compelling personal stories and in rich detail, McClain reveals the give-and-take interaction between the institutional church in Rome and the needs of believers and the hands-on clergy who provided their pastoral care within England. In doing so, she illuminates larger issues of how believers and low-level clergy push[ed] the limits of official orthodoxy in order to meet devotional needs.

Table of Contents (from my notes and including the subheads in the chapters):

Introduction
Chapter 1. "Knitting the Remnants": Catholic Challenges and Priorities in Protestant England
--A Changing Religious Environment: Penal Laws against the Practice of Catholicism
--How Many Catholics Were There?
--Who Was a Catholic?
--Catholic Priorities
--Immanence
--Saints, Priests, and Sacraments
--Salvation
--Meeting Catholic Priorities
--Evolving Goals
--Book Trade

Chapter 7. "Border of Wickedness?": Catholics in the Northern Shires
--A Convenient Partnership
--New Experiences in the North
--Protecting What was Theirs: Distinctive Attempts to Thwart Protestant Authority
--The Importance of the Borders
--Border Instability
--Why and How Catholics Flowed Back and Forth Across the Border
--Why Was This Possible?
--How Was This Possible?
--Northern Catholic Identity and Community
--Conclusion

McClain does present many compelling stories and much rich detail--sometimes repetitiously--in delineating the response of English Catholics to the loss of their churches, their parishes, their public devotional life, their communities, and most crucially, their Church's Sacraments. She carefully traces the changing circumstances of Catholics in England from the beginning of Elizabeth I's reign until the end of Charles I's reign, not strictly chronologically, but topically. For example, McClain notes that during the first years of Elizabeth's reign enforcement of the Acts of Uniformity (worship) and Supremacy (authority) was rather lax. She continues her examination of the development and variations in that enforcement during Elizabeth's reign by looking at the prisons in London, the distance and independence in Cornwall, and the distinctive issues of distance, the border with Scotland, and nobles' authority in the northern counties.

In another example of this topical treatment of changing circumstances during the period (1559 to 1642), she examines the controversy over the Oath of Allegiance during James I's reign but does not continue that theme into the reign of Charles I. So a reader should not expect a strictly chronological description of Catholic issues in England during this recusant period.

Because of my great devotion and interest in St. Robert Southwell, I was fascinated by her citation of his advice to Catholics during his time as a missionary priest to use their imaginations in their homes and in their environments. He encouraged them to dedicate rooms or areas in their houses to Jesus, to the Blessed Virgin Mary, to angels and saints; to use walking in fields or forests as pilgrimages to holy sites, to consecrate time and space to God in prayer and unity. These passages, cited from his Short Rule to a Good Life, accorded very well with what Anne R. Sweeney had written of St. Robert Southwell in Snow in Arcadia as images and imagination--inspired in him by the art and architecture of Counter-Reformation Rome--were so essential to his Ignatian poetic.

On the other hand, I was confused by her final statement about Blessed John Hambley, whose life and career she traces in two chapters (5 and 6): offering Mass at the Inns of Court in London and being born in Cornwall and leaving to become a missionary priest. She indicates that he died in prison in 1587 (p. 198) but he was hanged, drawn, and quartered on March 29 that year, according to martyrology.

McClain also alludes often to the trial and questioning of St. Margaret Clitherow, especially on the question, "What is the Church?" to which Clitherow had a good answer:


"It is that wherein the true word of god (sic) is preached which Christ langhs [launched] and left to his Apostles and they to their successors: ministering the seven sacraments which the same church has always observed, doctors preached, and martyrs and confessors witnessed. This is the church which I believe to be true."

McClain emphasizes the continuity recusant Catholics sought while they had to adapt to a great disruption: they could not practice their faith as they had done before (or as their parents and grandparents had done before Henry VIII's break from Rome) and yet they wanted to maintain the connection with the past because it was still alive and well in the world, just over the English Channel. At the same time that she emphasizes how they sought continuity, McClain explores how they had to change: praying the Rosary privately; reading their breviaries or Little Offices of the Blessed Virgin Mary in secret; if they did attend Anglican services to avoid paying the financially crippling fines, praying Catholic prayers; holding their rosaries in their pockets, etc.

Sometimes she stresses how far English Catholics were deviating from standard Catholic practice, but they were only doing so because it was the only thing they could do to maintain some continuity with the faith. When they couldn't attend Mass, confess their sins, receive Holy Communion, or even join their fellow citizens in the parish church their ancestors may have built and contributed to, they had to make Spiritual Communions, confess their sins to God and make a perfect act of contrition (declaring they never wanted to sin again!), join their intentions to Masses said on the Continent, etc. McClain notes that many of these devotions were based on late-medieval mystical piety, once considered rather dangerous because it bypassed the mediation of the ordained priesthood--but it was all that Catholics had, absent the regular ministrations of a priest, unless they were able to shelter their own chaplain, afford the fines, or benefit from friendly laxity in the enforcement of recusant laws. I think she might press this view of deviation too far, especially since it was Catholic priests recommending these practices to devout Catholics. They were not dissenting from Catholic teaching.

She does adopt what could be considered a controversial view of who was Catholic, accepting that Church Papists, those who outwardly conformed to the Church of England by attending services (not receiving Communion) but inwardly remained semi-faithful (?) to the Catholic Church were indeed still Catholic. In this, she could be following William Cardinal Allen's advice to the missionary priests he sent to England: if the laity confess attending an Anglican service as a sin, grant them absolution mercifully and gently, even if it's a sin they confess again and again (as most penitents do confess the same sins again and again).

Again, this study provides a great deal of detail: stories of arrests, imprisonments, conversations; data about books, martyrs, executions, prisons, embassy chapels; individual examples, etc, to develop a view of English Catholics' experience and life as a persecuted/prosecuted religious minority in a country that had once believed, prayed, and worshipped exactly as they did.

In her Conclusion, however, McClain tries to make more global claims of this history's significance in current situations of dissent within churches on doctrinal matters--something that never really occurs during this period among these Catholics--and the struggle to live in pluralistic societies, accommodating one another's beliefs and religious practices, bringing up book burnings, religiously inspired terrorism, all in the passive voice! ("Books are burned, martyrs are made, holy wars are declared, acts of religiously motivated terrorism proliferate"). Who burns the books, who executes the martyrs, who declares holy wars, who proliferates acts of religiously motivated terrorism? The passive voice avoids naming the actors. That's a lot of significance to cram into four paragraphs at the end of the book, especially when the purpose of the book was to help us understand the past, not necessarily help us understand the present, and especially when the situation, at least in the democratic West, is not that comparable.

I wish the book could have more illustrations and especially maps. And have a pretty cover!--but it's print on demand like so many scholarly books are now. It's an excellent resource, based on analysis of both primary and secondary sources, as McClain demonstrates familiarity with current scholarship.
Posted by Stephanie A. Mann at 12:00 AM