"Spanish Elizabethans" in Exile and Their Books 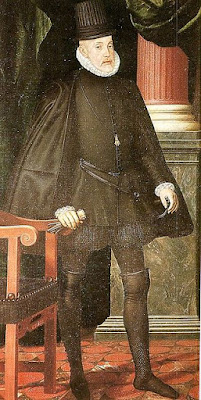 Since I'm reading a book right now about how Catholics in England adapted to their changed lives of worship and community (Lest We be Damned: Practical Innovation & Lived Experience Among Catholics in Protestant England, 1559-1642. Routledge: 2005, by Lisa McClain) seeing this book, Radicals in Exile: English Catholic Books During the Reign of Philip II by Freddy Cristobal Dominguez from Penn State University Press, among some new releases intrigues me.

In discussing the devotional literature written by English Catholics in exile for the recusant Catholics who remained home, McClain makes the point that the exiles often urged the recusants to observe Catholic worship just as they had before the Elizabethan Acts of Settlement and Uniformity. They should still go to Confession frequently, attend Mass on Sunday, etc., even though it was really impossible for them to do so: without priests, churches, parishes, etc. She comments that many of these exiles writing these guides were under the patronage of Tridentine communities and rulers: they were benefiting from the great Counter-Reformation revival in Rome and throughout Catholic Europe: they didn't know or acknowledge that what they were telling the "folks back home" was impossible. She further notes that, beholden to their mentors in exile, it behooved them to support papal or royal opinion on how English Recusant Catholics should be behave. Later Catholic writers, especially Jesuit missionary priests like St. Robert Southwell in A Short Rule to a Good Life, would provide more reasonable and feasible alternatives to the Catholic devotional and Sacramental life that the recusants of England had lost through personal, private, and imaginative means when no priest was available for the Sacraments.

Radicals in Exile explores another aspect of the lives and work of exiled English Catholics, particularly in Spain:

Facing persecution in early modern England, some Catholics chose exile over conformity. Some even cast their lot with foreign monarchs rather than wait for their own rulers to have a change of heart. This book studies the relationship forged by English exiles and Philip II of Spain. It shows how these expatriates, known as the “Spanish Elizabethans,” used the most powerful tools at their disposal—paper, pens, and presses—to incite war against England during the “messianic” phase of Philip’s reign, from the years leading up to the Grand Armada until the king’s death in 1598.

Freddy Cristóbal Domínguez looks at English Catholic propaganda within its international and transnational contexts. He examines a range of long-neglected polemical texts, demonstrating their prominence during an important moment of early modern politico-religious strife and exploring the transnational dynamic of early modern polemics and the flexible rhetorical approaches required by exile. He concludes that while these exiles may have lived on the margins, their books were central to early modern Spanish politics and are key to understanding the broader narrative of the Counter-Reformation.

Deeply researched and highly original, Radicals in Exile makes an important contribution to the study of religious exile in early modern Europe. It will be welcomed by historians of early modern Iberian and English politics and religion as well as scholars of book history.

"Book History" is a still-developing historical research discipline, according to this article in Perspectives on History, the newsmagazine of the American Historical Association:

"Book history" is a long-contested and ever-developing concept. It emerged from two schools of thought, both of which focused on the book in Western culture: 19th-century Anglo-American analytical bibliography, which examined the physical features of books to draw conclusions about their production, and the French scholars of histoire du livre, who in the 1960s began using a socioeconomic lens to study broad trends in publishing, writing, and reading. In 1982, Robert Darnton argued in his influential essay "What Is the History of Books?" that book history is research having to do with any of the stages of a work's life, from author to publisher to printer to bookseller to reader. Since then, scholars have debated how much to focus on the physical characteristics of books versus trends in book markets, authorship, and reading. How large a role content should play in book history has also been contested.

Book History is devoted to every aspect of the history of the book, broadly defined as the history of the creation, dissemination, and reception of script and print. It publishes research on the social, economic, and cultural history of authorship, editing, printing, the book arts, publishing, the book trade, periodicals, newspapers, ephemera, copyright, censorship, literary agents, libraries, literary criticism, canon formation, literacy, literary education, reading habits, and reader response. Book History is the official publication of the Society for the History of Authorship, Reading and Publishing, Inc. (SHARP).

Mary C. Ehrer of Fordham University, for example, has written a couple of books about reading and writing in pre-Reformation England and has inspired other historians to use "bibliography in the service of biography" or of history, political and religious, as demonstrated by a festschrift published by Boydell & Brewer:

Reading, writing, sharing texts, and book ownership in the fifteenth and sixteenth centuries, and how they fostered social and intellectual links and networks between individuals, particularly among women: these are subjects which the pioneering work of Mary C. Erler has done so much to illuminate. The essays here, in this volume in her honour, build on her scholarship, engaging with Professor Erler's characteristic use of bibliography in the service of biography by investigating how the physical object of the book can enlighten our understanding of medieval readers and writers. They analyze, for example, what "reading" means in terms of the act itself (and the accessories, such as bookmarks, that helped to set the stage for reading), whether done aloud or silently, in such different venues as an aristocratic court, bourgeois household, village community, and monastic cloister. They also consider the culture of medieval reading practices, especially those of women, across social classes, and in terms of the transition between the pre- and post-Reformation periods; the fluidity of genre boundaries; and changes in devotional reading and writing in this liminal period. A wide variety of genres are covered, including secular romance, devotional texts, schoolbooks, and the illustrated Old Testament preface to the famous Queen Mary Psalter, which recasts the story and image of ancient Israelites to suit elite readerly taste.