New Series on the SRMS: 50 years of the 40 Martyrs 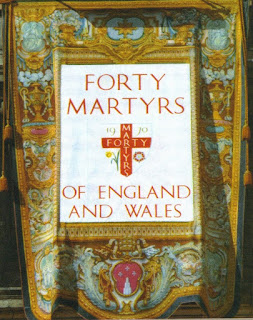 Before Matt Swaim, Anna Mitchell and I began the series on Lenten and Easter reflections based on St. John Henry Newman's sermons, we had been doing a series on the great anniversaries this year: events, births, deaths, etc, from the Battle of Thermopylae to the birth of Karol Wojtyla (Pope St. John Paul II).

One of the anniversaries to mark this year is October 25, 1970, the 50th anniversary of the canonization of the Forty Martyrs of England and Wales by Pope St. Paul VI. So we are starting a new series on the Son Rise Morning Show on Monday, June 8 (at the usual time, 6:50 a.m. Central/7:50 a.m. Eastern). Each Monday morning, we will highlight two (or three) martyrs, concluding on Monday, October 26 the day after the anniversary.

To start us off, on Monday, June 8, I'll talk to Anna about the time and the context of the canonizations in 1970, 35 years after St. John Fisher and St. Thomas More were canonized by Pope Pius XI--eleven of these 40 martyrs had been beatified with Fisher and More by Pope Pope Leo XIII in 1886 (84 years before); 29 more of these 40 martyrs had been beatified by Pope Pius XI in 1929 (41 years before).

So why did Pope Paul VI canonize these 40 martyrs in 1970? Why were there some who thought the timing inopportune?

For answers, we turn to this article from the weekly English edition of L'Osservatore Romano on October 29, 1970, preserved for us in the EWTN library.

In willing obedience to the command of Christ who bade His disciples love one another, they declare that, with His help, they wish to leave in the hands of the God of mercy all that in the past has been opposed to this precept of charity, and that they make their own the mind of the Apostle which he expressed in these words: ‘Forgetting those things which are behind, and reaching forth unto those things which are before, I press towards the mark for the prize of the high calling of God in Christ Jesus’ (Phil 3:13-14).

They affirm their desire that all those Christians who belong to these two Communions may be animated by these same sentiments of respect, esteem and fraternal love, and in order to help these develop to the full, they intend to inaugurate between the Roman Catholic Church and the Anglican Communion a serious dialogue which, founded on the Gospels and on the ancient common traditions, may lead to that unity in truth, for which Christ prayed.

The dialogue should include not only theological matters such as Scripture, Tradition and Liturgy, but also matters of practical difficulty felt on either side. His Holiness the Pope and His Grace the Archbishop of Canterbury are, indeed, aware that serious obstacles stand in the way of a restoration of complete communion of faith and sacramental life; nevertheless, they are of one mind in their determination to promote responsible contacts between their Communions in all those spheres of Church life where collaboration is likely to lead to a greater understanding and a deeper charity, and to strive in common to find solutions for all the great problems that face those who believe in Christ in the world of today. . . .

As the L'Observatore Romano article notes, the canonization of these 40 Martyrs seemed to contradict the quotation from Saint Paul's Letter to the Philippians ("Forgetting those things which are behind"), and Dr. Ramsey opined that it was not timely, ecumenically speaking:

In more recent times—November 1969—the Archbishop of Canterbury, Dr. Ramsey, had expressed his apprehension that this Canonization might rekindle animosity and polemics detriment to the ecumenical spirit that has characterized the efforts of the Churches recently. But the reaction of the press, lay, Anglican and Catholic, showed clearly that this concern—though shared by some Anglicans and Catholics—did not correspond to the view of the vast majority. Many people, in fact, both Anglicans and Catholics, were aware of the fact that, right from the beginning of the re-opening of the Cause, the policy of its Promoters had been characterized by an extremely serene and ecumenical note; what is more, they realized the positive repercussions it offers just in this field if it is presented in this very spirit.

In fact, public opinion seemed to accord with the postulator's view:

The vast majority of people understood all this. The most authoritative voice in this sense was that of the British Council of Churches, which made a public declaration on the matter on December 17th, 1969. Not only does it recognize the importance for the Catholic Church to venerate its Martyrs, to whom the survival of the Catholic Church in England and Wales is essentially due, but it also expressed satisfaction that the various Christian denominations are united today in recognizing the tradition of the Martyrs as a common element from which we must all draw strength disregarding denominational frontiers.

As to why the cause of the English martyrs was revived so many years after the previous beatifications and canonizations Fr. Paolo Molinari, SJ the postulator of the cause explained:

In still more recent times, the Hierarchy of England and Wales, conscious of the deep devotion to the martyrs who on different occasions had been declared blessed by the apostolic See, and aware that this devotion was addressed especially to some of the most popular of them was induced by the requests of the faithful and the multiplicity of favours obtained, to promote the canonization not of the whole host of these martyrs, but of a limited group of them. Right from the beginning of the negotiations, the Canonization Cause of these Martyrs was entrusted by the Hierarchy of England and Wales to Fr. Paolo Molinari, Postulator General of the Society of Jesus and President of the College of Postulators. He in turn nominated as Assistant Postulators Father Philip Caraman and James Walsh of the English Province of the Society.

Furthermore, there were miracles attributed to the intercession of the martyrs:

Even before the rehearing of the Cause, many reports of favours and apparently miraculous cures attributed to the intercession of our Blessed Martyrs, had come to the knowledge of the Catholic Hierarchy of England and Wales, which hastened to inform the competent Roman Authorities.

Catholics in England had been encouraged to honor the martyrs and to seek their prayers:

As a result of the intensification of the devotion of the faithful and their prayers, a good many events took place which looked like miracles. Sufficient data were collected about them to induce the Archbishop of Westminster, then Cardinal William Godfrey, to send a description of 24 seemingly miraculous cases to the Sacred Congregation.

The most striking of these and of the others that continued to be notified to the Postulation were first examined with special care by doctors of high repute. On the basis of their answers, two cases were chosen and the usual Apostolic Proceedings were instituted, and the acts were sent to the Sacred Congregation of Rites in Rome.

So on May 18, 1970, Pope Paul VI announced the canonization of the 40 Martyrs of England and Wales:

"We greatly rejoice that unanimously you have asked that these blessed Martyrs of England and Wales be canonized; this is also our desire. It is our intention to enroll them among the saints and to declare them worthy of the honours that the Church attributes to those holy persons who have obtained their heavenly reward. With God's help, we will do this on the twenty-fifth day of October of this year in the Vatican Basilica". 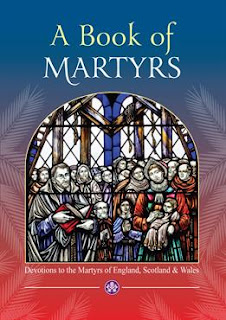 From the reign of Henry VIII:

From the reign of Elizabeth I:

During the reign of James I:

During the reign of Charles I and/or the Civil War/Interregnum period:

During the reign of Charles II:

The Popish Plot Martyrs during the reign of Charles II:

*The six Welsh martyrs are:

Holy Martyrs of England and Wales, pray for us!
Posted by Stephanie A. Mann at 12:00 AM