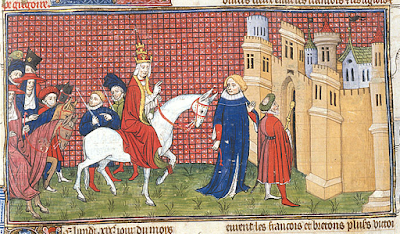 On May 22, 1377, Pope Gregory XI, an Avignon-era pope who would finally return to Rome later that year (November 7) at Saint Catherine of Siena's insistence, sent a series of Papal Bulls to England condemning the teachings of John Wycliffe, an ordained priest of the Catholic Church. As Christian History magazine summarized the pope's efforts in a 1983 issue:

ON MAY 22, 1377, Pope Gregory XI issued five bulls condemning the work of John Wycliffe. Three of the bulls were sent jointly to the Archbishop of Canterbury, Simon Sudbury, who held the ecclesiastical power in England, and to the Bishop of London, William Courtenay, who was eager to carry out the Pope’s wishes. Needing political support, the Pope issued a similar bull to King Edward III, who died before he received it. Wishing to put pressure on Oxford, Gregory sent the final bull to the university’s chancellor.

Since Father John Wycliffe's doctrines are usually thought to be precursors of the sixteenth century Reformers' thoughts and a legacy of dissent from Papal authority before the English Reformation, it seems appropriate to remember this date. According to Fordham University's Medieval Sourcebook, these are Wycliffe's teachings that Pope Gregory XI condemned as not conforming to the teaching of the Catholic Church (there were 24 in total; these are the first 12):

1. That the material substance of bread and of wine remains, after the consecration, in the sacrament of the altar.
2. That the accidents do not remain without the subject, after the consecration, in the same sacrament.
3. That Christ is not in the sacrament of the altar identically, truly and really in his proper corporeal presence.
4. That if a bishop or priest lives in mortal sin he does not ordain, or consecrate, or baptize.
5. That if a man has been truly repentant, all external confession is superfluous to him or useless.
6. That it is not founded in the gospel that Christ instituted the mass.
7. That God ought to be obedient to the devil.
8. That if the pope is fore-ordained to destruction and a wicked man, and therefore a member of the devil, no power has been given to him over the faithful of Christ by any one, unless perhaps by the Emperor.
9. That since Urban VI, no one is to be acknowledged as pope; but all are to live, in the way of the Greeks, under their own laws.
10. To assert that it is against sacred scripture that men of the Church should have temporal possessions.
11. That no prelate ought to excommunicate any one unless he first knows that the man is excommunicated by God.
12. That a prelate thus excommunicating is thereby a heretic or excommunicate. . . .

Note that the first three condemned Wycliffe's erroneous teachings about the Sacrifice of the Mass and the Sacrament of Holy Communion.

In the Papal Bull dispatched to the chancellor of the University of Oxford, Adam de Toneworth, Pope Gregory chastised him for his neglect and inaction:

Gregory, bishop, servus servorum dei, to his beloved sons the Chancellor and University of Oxford, in the diocese of Lincoln, grace and apostolic benediction.

We are compelled to wonder and grieve that you, who, in consideration of the favors and privileges conceded to your University of Oxford by the apostolic see, and on account of your familiarity with the Scriptures, in whose sea you navigate, by the gift of God, with auspicious oar, you, who ought to be, as it were, warriors and champions of the orthodox faith, without which there is no salvation of souls, ---that you through a certain sloth and neglect allow tares to spring up amidst the pure wheat in the fields of your glorious University aforesaid; and what is still more pernicious, even continue to grow to maturity. And you are quite careless, as has been lately reported to us, as to the extirpation of these tares; with no little clouding of a bright name, danger to your souls, contempt of the Roman Church, and injury to the faith above mentioned. And what pains us the more, is that this increase of the tares aforesaid is known in Rome before the remedy of extirpation has been applied in England where they sprang up. By the insinuation of many, if they are indeed worthy of belief, deploring it deeply, it has come to our ears that John de Wycliffe, rector of the church of Lutterworth, in the diocese of Lincoln, Professor of the Sacred Scriptures (would that he were not also Master of Errors), has fallen into such a detestable madness that he does not hesitate to dogmatize and publicly preach, or rather vomit forth from the recesses of his breast, certain propositions and conclusions which are erroneous and false. . . .

Pope Gregory XI may have dispatched these five Papal Bulls on May 22 but, according to the British Library page on John Wycliffe, they took some time to arrive:

These decrees did not arrive in England until Christmas 1377, whereupon Wycliffe was arrested. He was subsequently released and then summoned to a meeting with Archbishop Sudbury and Bishop Courtney. In the spring of 1378 Wycliffe appeared before the authorities in Lambeth, but the investigation was interrupted by Sir Lewis Clifford who was sent by Joan of Kent, the mother of the king.

The king mentioned above was the young Richard II, son of Edward, the Black Prince, who had predeceased his father (Richard's grandfather) King Edward III. The young king was 10 years old ruled with a council of advisors not including his uncle, John of Gaunt, but also without a regent. Nonetheless, his mother, who protected some of Wycliffe's followers, the Lollards, had some influence and power at Court, and thus was able to protect Wycliffe in this case.

As the British Library concludes, however, the association between Wycliffe and the Peasant's Revolt of 1381 led to further trouble for Wycliffe, even though he died in relative obscurity in 1384:

Despite this royal protection, in May 1382 Wycliffe was condemned at the Blackfriars Council. In June of the previous year there had been a rebellion in England, known as the Peasants’ Revolt: a group of rebels had marched on London, where they burnt buildings (including the Savoy Palace, the palace of John of Gaunt) and murdered anyone they encountered who was thought to be associated with the government. It’s unclear what influence Wycliffe’s works had on the rebels, but his ideas became associated with them.

In Henry IV's reign (who had supplanted Richard II), heresy laws were passed against Wycliffe's teachings and his Lollard followers were targeted, as the UK Parliament's website details:

In 1401 Parliament took action against believers known by the abusive term of Lollards or mumblers. The Lollards included some MPs – who from the 1380s began to speak out against important aspects of the Church and its thinking.

Inspired by the writings of the Oxford academic John Wyclif, they objected to the meanings attached to certain rituals used in church worship. They also felt that more attention should be given to God’s own words as revealed in the Bible, than on interpretations made by the Church.

Before the fifteenth century the English Church had been largely free of this kind of heresy or deviation from its teachings. But in 1401 Parliament enacted a law called De Heretico Comburendo - On the burning of heretics - by which Lollard leaders were liable for imprisonment, trial and execution. It is thought that about 100 people were burned for heresy under this Act.

This act and two others of Richard II and Henry V were revived by the 1554 Parliament of Mary I, thus leading to renewed prosecution of heresy during her reign. These laws had been repealed by Henry VIII and Edward VI, but had been in force during Henry VIII's reign for some time (and his father's reign too) while Thomas More was Chancellor, investigating and prosecuting laws against heresy.