Dangerous to Be an Heir: Margaret Stanley, RIP 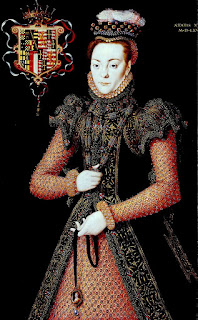 Margaret Stanley, Countess of Derby, who died on September 28, 1596, is another example of an heir to Elizabeth I who found out how dangerous that position was. Like the Grey sisters, Catherine and Mary (and Jane before them), she was an heir because her grandmother (on her mother's side) was Mary Tudor, former Queen of France, wife of Charles Brandon, 1st Duke of Suffolk, and Henry VIII's younger sister. Her father was Henry Clifford, 2nd Earl of Cumberland and her mother Lady Eleanor Brandon, the Brandon's second daughter.

Because she was a possible successor, whom she would marry was an important decision. John Dudley, the 1st Duke of Northumberland suggested in 1552 that she should marry his son Guildford, but Edward VI was opposed to that alliance (thus Dudley had that son available to marry Lady Jane Grey); then Dudley's brother Andrew was mentioned. Finally, when Mary I came to the throne, Margaret Clifford married Henry Stanley, 4th Earl of Derby. As this blog explains her situation:

She was the great granddaughter of Henry VII and according to Henry VIII’s will if anything happened to Elizabeth she would become queen of England. She therefore became Elizabeth’s heir presumptive. It was not a good place to be.

Before then she’d managed to avoid becoming a pawn in the game of crowns through her father’s forethought and then through her own lack of popularity. In 1553 the Duke of Northumberland had proposed to marry her to either his son, Guildford, or his brother, Sir Andrew Dudley, but Cumberland refused the match on his daughter’s behalf and took no part in the attempt to make Lady Jane Grey queen (sensible man).

Instead, Margaret was married with Queen Mary’s blessing in Westminster Abbey in February 1555 to Henry Stanley, Lord Strange. He was descended from the Woodvilles, Howards, Nevilles and a certain Thomas Stanley who happened to be married to Margaret Beaufort and who sat around on hillsides during key battles of the Wars of the Roses waiting to see how it would all pan out – landing the title Earl of Derby for his pains.

By 1557 Margaret was recorded as saying that Lady Jane Grey’s treason had excluded her sisters, Catherine and Mary Grey, from the succession, thus making Margaret, Queen Mary’s heiress presumptive…yes I know there was Elizabeth to take into consideration but Mary’s relationship with her sister was fraught by 1557. Mary was fond of stating that Elizabeth had the look of lute player Mark Smeaton. There was also the fact that Elizabeth was notably not Catholic whereas Margaret was. . . .

But Mary I was more obedient to the wishes of her father and the decisions of Parliament to interfere with the line of succession. Her great hope was to have a son to displace Elizabeth, not contravene the settled succession. Nevertheless, Margaret's troubles continued apace as she speculated on her opportunity to succeed Elizabeth I during her reign:

Lady Strange developed a dangerous interest in alchemy, to which she had been introduced by her father. An interest in the occult, although widespread among Elizabethans, could be a dangerous hobby; an interest in fortune-telling especially so for one in Margaret's position on the periphery of the succession dispute. From 1572, Margaret was countess of Derby. She consulted with wizards "with a vain credulity, and out of I know not what ambitious hope”, according to William Camden, and lost the Queen’s favor. In 1578 she was accused of employing a "magician", actually a well-known physician named Dr. Randall, to cast spells to discover how long Queen Elizabeth would live. According to one source, Randall was hanged and Margaret was banished from court and spent the rest of her life, eighteen years, in the custody of her kinsman, Thomas Seckford (d.1587), Master of Requests, to whom she was related through his mother, Margaret (d. 1557), the daughter of Sir John Wingfield (d. 1509) of Letheringham, and aunt of Charles Brandon, Duke of Suffolk. Later she had a series of keepers, although she was allowed to live in her own house at Isleworth.

According to a book on the Stanley family, her debts continued to mount. In 1579, the Privy Council ordered the Lord Mayor of London to pressure her creditors to stop hounding her. In May 1580, Margaret's husband petitioned to be allowed to sell lands to pay debts. In Jun 1581, the Privy Council appointed a commission to find ways to reduce the Derbys' debts. In Dec 1581, the Privy Council was after the Earl to pay Margaret her pension. In 1582, Queen Elizabeth finally approved the sale of Derby lands. Margaret proceeded to sell off land in Lincolnshire, Yorkshire, and Staffordshire valued at £88 8s.4d/year. With a twenty year purchase, that meant she probably received £1,768 6s.10d. In 1584-93, her husband and sons borrowed at least £8,732 13s.4d. against Derby holdings and sold other land for £3800. Not only had Margaret's debts mounted, but the Earl had incurred other debts in the course of undertaking diplomatic missions for the Crown. Before their separation, Margaret gave Lord Strange four sons, Edward and Francis, who died young, Ferdinando, 5th Earl of Derby, and William, 6th Earl of Derby.

In spite of chronic rheumatism and toothache, her husband's infidelities and their acrimonious financial disputes, the Countess of Derby lived on into the mid-1590s. The historian William Camden said of her that "through an idle mixture of curiosity and ambition, supported by sanguine hopes and a credulous fancy, she much used the conversations of necromancers and figure flingers". She seems to have been rather a frivolous and silly woman.

Her husband preceded her in death by three years and three days, dying on September 25, 1593.

It can't have helped her relationship with Elizabeth I that her father, Henry Clifford, 2nd Earl of Cumberland, had some involvement in the Howard-Dacre plots against Elizabeth and may have sheltered Catholic priests:

After his retirement in 1547 he is said to have visited the court only thrice: at Queen Mary's coronation, on his daughter's marriage, and again soon after Queen Elizabeth's accession (Whitaker, 338). In July 1561 he and Lord Dacre, his father-in-law [through Clifford's second marriage to Anne Dacre], were accused of protecting the popish priests in the north. A similar charge was advanced in February 1562. He was in 1569 strongly opposed to the contemplated marriage of Mary Queen of Scots and the Duke of Norfolk, and readily promised support to the great rebellion of that year. In May 1569 he was in London. As the year wore on he gave in his adherence to the scheme for proclaiming Mary queen of England; but when the critical moment arrived he did not act with vigour, but as a 'crazed man, leaving his tenants to the leadership of Leonard Dacres' (Froude, vii. 469, ix. 412, 446, 449, 511). According to Dugdale, he even assisted Lord Scrope in fortifying Carlisle against the rebels (i. 345).

As to Margaret Clifford's dangerous interest in the occult (which I agree is dangerous), we should recall that science in that era was mixed with alchemy and astrology. Dr. Randall may have suffered for the spells or charts he cast, but Elizabeth I's favorite scientist and astronomer, Dr. John Dee, survived casting charts to predict Mary I and Philip of Spain's fates, held in house arrest by Bishop Bonner during Mary I's reign. Evidently Elizabeth I consulted Dr. Dee for both magic and scientific insights.

Image credit: Portrait by Hans Eworth thought to be either Lady Margaret or her mother, Lady Eleanor Brandon.
Posted by Stephanie A. Mann at 12:30 AM

Email ThisBlogThis!Share to TwitterShare to FacebookShare to Pinterest
Labels: alchemy and astrology, Countess of Derby, Elizabeth I, Margaret Stanley, Mary Tudor the Duchess of Suffolk, portraits, the Brandon family, the succession