Michealmas and St. Michael the Archangel 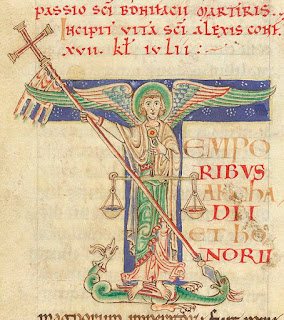 According to the Ordo of the Roman Missal of 1962, today we celebrate The Dedication of the Archangel Michael, with the commemoration of the 16th Sunday after Pentecost. According to Volume IX (September) of Father Alban Butler's The Lives of the Saints:

THIS festival has been kept with great solemnity on the 29th of September ever since the fifth age, and was certainly celebrated in Apulia in 493. The dedication of the famous church of St. Michael on Mount Gargano, in Italy, 1 gave occasion to the institution of this feast in the West, which is hence called in the Martyrologies of St. Jerome, Bede, and others, The dedication of St. Michael. The dedication of St. Michael’s church in Rome, upon Adrian’s Mole, which was performed by Pope Boniface IV. in 610, and that of several other churches in the West, in honour of this arch-angel, were performed on this same day. 2 Churches were likewise erected in the East, in honour of St. Michael and other holy angels, from the time when the Christian worship was publicly established by the conversion of Constantine, doubtless upon the model of little oratories and churches, which had been formerly raised in the intervals of the general persecutions, in which storms they were again thrown down. Sozomen informs us, that Constantine the Great built a famous church in honour of this glorious archangel, called Michaelion, and that in it the sick were often cured, and other wonders wrought through the intercession of St. Michael. This historian assures us, that he had often experienced such relief here himself; and he mentions the miraculous cures of Aquilin, an eminent lawyer, and of Probian, a celebrated physician, wrought in the same place. This church stood about four miles from Constantinople; a monastery was afterwards built contiguous to it. Four churches in honour of St. Michael stood in the city of Constantinople itself; their number was afterwards increased to fifteen, which were built by several emperors. 3

Though only St. Michael be mentioned in the title of this festival, it appears from the prayers of the church that all the good angels are its object, together with this glorious prince and tutelar angel of the church. On it we are called upon, in a particular manner, to give thanks to God for the glory which the angels enjoy, and to rejoice in their happiness. Secondly, to thank him for his mercy to us in constituting such glorious beings to minister to our salvation, by aiding and assisting us. Thirdly, to join them in adoring and praising God with all possible ardour, desiring and praying that we may do his will on earth with the utmost fidelity, fervour, and purity of affection, as it is done by these blessed spirits in heaven; and that we may study to sanctify our souls in imitation of the spotless angels to whom we are associated. Lastly, we are invited to honour, and implore the intercession and succour of the holy angels.

The shrine church of St. Michael the Archangel on Mount Gargano still draws pilgrims, according to this website (which is certainly tinged with post-Vatican II obsession!):

San Michele developed into a fairly important medieval shrine, visited by kings and saints and commoners. But the cult of San Michele hardly seems like one that a person might expect to thrive 50 years after Vatican II. With its medieval buildings, including the shrine, one might expect that Monte Sant’Angelo, the town that grew up there, would be a good tourist attraction whose religious appeal had faded. Yet this hardly seems to be the case. Carloads and busloads of tourists continue to come to town. But interestingly, they all bypass the castle museum at the top of the hill and a number of other high quality (mostly free) medieval sites, heading past religious souvenir shops and restaurants, straight down the stairs to the cave, like good pilgrims. Many are on pilgrimages that have taken them to the nearby shrine of Padre Pio. The shrine in itself could be a great teaching site for an art history class, but seems instead to be very much a devotional site. Pilgrims typically spent considerable time praying in pews, at various statues and altars in the grotto, and at Mass there. Interestingly, a statue of the Immaculate Conception is placed at the front of the Archangel Michael in the sanctuary. It is an unusual image for Italy, since she is not a Madonna with child. Despite her presence, pilgrims said they come to honor the Archangel. Interestingly, Immaculate Conception statues are not in evidence in the souvenir stores in town, where the Archangel Michael is ubiquitous, followed by Padre Pio. A small museum of ex votos on site gives witness to a long history of favors received through the intercession of St. Michael.

In England, Michaelmas was an important date as it was used as one of the quarters of the year, a date for reckoning debts, holding elections, etc:

As it falls near the equinox, the day is associated with the beginning of autumn and the shortening of days; in England, it is one of the “quarter days”.

There are traditionally four “quarter days” in a year (Lady Day (25th March), Midsummer (24th June), Michaelmas (29th September) and Christmas (25th December)). They are spaced three months apart, on religious festivals, usually close to the solstices or equinoxes. They were the four dates on which servants were hired, rents due or leases begun. It used to be said that harvest had to be completed by Michaelmas, almost like the marking of the end of the productive season and the beginning of the new cycle of farming. It was the time at which new servants were hired or land was exchanged and debts were paid. This is how it came to be for Michaelmas to be the time for electing magistrates and also the beginning of legal and university terms.
Posted by Stephanie A. Mann at 12:00 AM