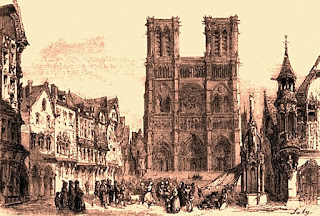 If you've seen the Charles Laughton-Maureen O'Hara movie version of Victor Hugo's The Hunchback of Notre Dame, you surely remember the moment that Quasimodo carries Esmeralda into Notre Dame Cathedral and raises her in his arms to proclaim "Sanctuary, Sanctuary!" And the crowd below goes wild!

As this blog dedicated to English Legal History notes, criminals in England had the right of Sanctuary too, claiming protection from the Catholic Church:

In medieval England, a criminal could go to a church and claim protection from the law. The authorities and the processes of criminal justice could not reach him. This was based on the idea that no force could be used on the consecrated and holy ground of the churches.

This privilege, called sanctuary, could be taken up by any criminals, ranging from murderers, rapists and thieves to the simple debtor who owed a sum of money.

The common law of the time stated that the privilege of sanctuary could only be used for up to 40 days. However, there were in existence some large sanctuaries (such as Westminster Abbey) that could house hundreds of criminals and had the facilities for them to stay indefinitely. When the criminals attempted to continue their criminal activities from the Abbey, the practice of these large sanctuaries was heavily frowned upon by the authorities and the public.

One of the most famous claimers of Sanctuary was not a criminal, however, but the wife and then widow of King Edward IV, Elizabeth Woodville. She remained with her children and household in Westminster Abbey's Sanctuary during two periods of the Wars of the Roses.

Of course, Henry VIII, since Church and State become one under his Supreme rule, eventually eliminated the rights of Sanctuary:

There was a significant case between 1516 and 1520 regarding a large sanctuary at St John’s Priory. This led to calls for reform and Henry VIII declared that the ancient kings and old popes never had the intention of letting the sanctuaries be used to such a gross extent.

Henry proceeded to abolish almost all sanctuaries and removed the possibility of using the privilege for almost all crimes. The practice did not breathe its last until a statute of 1624 which stated ‘no sanctuary or privilege of sanctuary to be hereafter admitted or allowed in any case’. 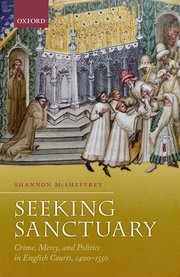 The reason I bring this up is because there's a fascinating post on the Oxford University Press blog by an author of a recent book about the practice of Sanctuary in England and her reactions to another famous author on the subject. Shannon McSheffrey, Professor of History at Concordia University in Montreal writes:

For the last fifteen years I have been having an intense dialogue in my head with a long-dead historian, Isobel D. Thornley (1893-1941). Isobel is my best frenemy. Two pieces she wrote in 1924 and 1932 remain standard citations for one of my favourite subjects, medieval sanctuary; this is a feat of scholarly longevity that few of her contemporaries can boast. Having dug through the same documents—and benefitted enormously from following in her footsteps—I admire Isobel’s archival diligence and the boldness of her arguments. I also disagree with almost everything she says.

Isobel’s place in the interwar historical community in London is mostly forgotten: she does not appear in any directories of important historians of the past—neither the Institute of Historical Research’s London’s Women Historians, for instance, nor another of the IHR’s pantheons, Making History. Her name does live on in the form of the Thornley Bequest Fund, established when she left her estate to the University of London. Over the decades Isobel’s legacy has benefited hundreds of historians, both students and academic researchers, many of whom probably have no idea who she was. . . .

The continuing influence of her work on sanctuary is not due to a precocious modernity; her sententious writing style probably seemed old-fashioned in the 1920s. It is, I think, the clarity and the no-nonsense tone that continues to convince many readers, even though her interpretations are unquestionably Whiggish, congruent with the views of her mentor Pollard. Sanctuary was a “great evil,” for it allowed criminals to escape punishment. In her account, “bold” and forward-thinking civic leaders allied with the judiciary to destroy the “hoary” popish institution of sanctuary and bring England into Protestant modernity.

I disagree with Thornley’s interpretation of English sanctuary on many fronts, too many to rehearse here (quick version: it was much more complicated). . . .
Posted by Stephanie A. Mann at 12:30 AM