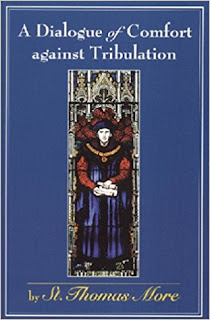 John Fowler was a Catholic printer and scholar who died on February 13, 1579 (new style). According to his entry in the Dictionary of National Biography, 1885-1900, Volume 20, he was

born at Bristol in 1537, was admitted in 1551 to Winchester School, whence he proceeded to Oxford, and was a fellow of New College in that university from 4 Oct. 1553 to 1559. He was admitted B.A. 23 Feb. 1556–7, and took the degree of M.A. in 1560, though he did not complete it by standing in the comitia. Dr. George Acworth [q. v.], in his reply to Sanders, asserts that Fowler, in the first year of Elizabeth's reign, took the oath renouncing the pope's supremacy, in order that he might retain the valuable living of Wonston, Hampshire, to which he had been instituted (De visibili Romanarchiâ, pp. 33, 34). However this may be, he left England in consequence of the changes of religion soon after the queen's accession and retired to Louvain, where he set up a printing press, which he afterwards removed to Antwerp, and finally to Douay. He printed and published several important works written by the exiled clergy, in support of the catholic cause. Henry Simpson, in his examination at York on 11 Oct. 1571, stated that Fowler printed all the English books at Louvain, written by Harding or others, and that the Duke of Alva's printer in Brussels produced all the Latin works which were written against the doings in England. He added that William Smith, a Welshman, servant to Dr. Harding, commonly brought the books to the press (Cal. of State Papers, Dom. Eliz. 1566–79, p. 365). Wood says ‘he was well skill'd in the Greek and Latin tongues, a tolerable poet and orator, and a theologist not to be contemn'd. So learned he was also in criticisms, and other polite learning, that he might have passed for another Robert or Henry Stephens’ (Athenæ Oxon. ed. Bliss, i. 441). Dr. (afterwards Cardinal) Allen calls him ‘catholicissimus et doctissimus librorum impressor,’ in a letter addressed from Rheims in 1583 to Father Alphonsus Agazzari, rector of the English seminary at Rome, asking his interest in favour of Fowler's brother Henry, then in necessitous circumstances in that city (Records of the English Catholics, ii. 216). Fowler married Alice, daughter of John Harris, formerly secretary to Sir Thomas More, and died at Namur on 13 Feb. 1578–9, being buried near the body of his father-in-law, in the church of St. John the Evangelist (Pits, De Angliæ Scriptoribus, p. 772). His widow lived afterwards at Douay, where she entertained several of the English exiles as boarders (Dodd, Church Hist. i. 532).

In addition to the marital connection to St. Thomas More mentioned above, the Catholic Encyclopedia notes that he edited and published one of St. Thomas More's works:

He seems to have had a press at Antwerp as well as at Louvain, for his Antwerp books range from 1565 to 1575, whereas his Louvain books are dated 1566, 1567 and 1568; while one of his publications, Gregory Martin's "Treatise of Schism" bears the impress, Douay, 1578. More thorough bibliographical research than has yet been made into the output of his presses will probably throw new light upon his activity as a printer. The original works or translations for which he was personally responsible are: "An Oration against the unlawful Insurrections of the Protestants of our time under pretence to reforme Religion" (Antwerp, 1566), translated from the Latin of Peter Frarinus, which provoked a reply from Fulke; "Ex universâ summâ Sacrae Theologiae Doctori os S. Thomae Aquinatis desumptae conclusiones" (Louvain, 1570); "M. Maruli dictorum factorumque memorabilium libri VI" (Antwerp, 1577); "Additiones in Chronica Genebrandi" (1578); "A Psalter for Catholics", a controversial work answered by Sampson; epigrams and verses. The translation of the "Epistle of Orosius" (Antwerp, 1565), ascribed to him by Wood and Pitts, was really made by Richard Shacklock. Pitts also states that he wrote in English a work "Ad Ducissam Feriae confessionis forma", Fowler also edited Sir Thomas More's "Dialogue of Comfort against Tribulation" (Antwerp, 1573).

Email ThisBlogThis!Share to TwitterShare to FacebookShare to Pinterest
Labels: A Dialogue of Comfort Against Tribulation, Catholics in exile, John Fowler, St. Thomas More