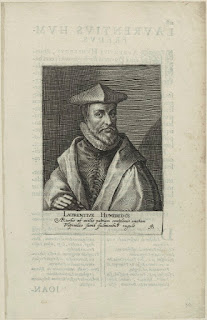 Lawrence Humphrey died on February 1, 1590. Not Blessed Lawrence Humphrey who was martyred at Winchester in 1591 because while delirious with a fever, he was overheard cursing Elizabeth and proclaiming her a heretic. When he recovered he was charged with treason, even though he could not remember saying what witnesses reported! He was hanged, drawn, and quartered anyway.

This Lawrence Humphrey, president of Magdalen College, Oxford, and dean of first Gloucester and then Winchester cathedrals, had some trouble with Elizabeth I too because he did not want to wear the surplice. As Thompson Cooper describes his career and beliefs in the Dictionary of National Biography:

Throughout his life Humphrey advocated advanced protestant opinions. He consequently obtained from the college on 27 Sept. 1553, soon after the accession of Mary, leave to go abroad, on condition that he should not depart from the realm without the royal license. He went first to Basle, and then to Zurich, and his name is subscribed to a letter from the protestant exiles at the latter place to their brethren at Frankfort, dated 13 Oct. 1554. On 24 Dec. 1554, and again on 15 June 1555, the college authorities gave him a further extension of leave, and at the same time helped him to defray the cost of his studies abroad. While at Zurich he associated with Parkhurst, Jewel, and other protestant exiles, and lodged in the house of Christopher Froschover, the printer (Zurich Letters, i. 11). He highly extols the hospitality and kindness of the magistrates and ministers there. As he continued abroad beyond the time for which leave had been granted, his name fell out of the list of fellows of Magdalen College before the July election in 1556. On 23 April 1558 he was admitted into the English protestant congregation at Geneva (Burn, Livre des Anglois à Genève, p. 11). In June 1559 he was living at Basle.

After the death of Queen Mary he returned to England. During his absence he had corresponded on theological subjects with the divines at Geneva, and brought back with him 'so much of the Calvinian, both in doctrine and discipline, that the best that could be said of him was that he was a moderate and conscientious nonconformist' (Wood, Athenæ Oxon. ed. Bliss, i. 558). In 1560, however, he was appointed regius professor of divinity in the university. In the year following he was a candidate for the presidentship of Magdalen College, and obtained letters of recommendation from Archbishop Parker and Grindal, bishop of London, but the fellows, being 'leavened much with popery,' at first refused to choose him. On 28 Nov. 1561, however, he was, on a second scrutiny, unanimously elected, and took the oaths on 17 Dec. He soon discovered that he had succeeded to 'a post of honour, but of small profit,' and accordingly, in January 1561-2, he unsuccessfully applied to Cecil for a canonry of Christ Church, adducing many instances of such pluralities (Cal. State papers, Dom. 1547-80, pp. 192, 193). He graduated B.D. on 10 June 1562, and was created D.D. on the 13th of the following month (Oxf. Univ. Reg., Oxf. Hist. Soc., i. 218). Taking advantage of the important offices he held, Humphrey 'did not only … stock his College with a generation of Nonconformists, which could not be rooted out in many years after his decease, but sowed also in the Divinity School … seeds of Calvinism, and laboured to create in the younger sort … a strong hatred against the Papists' (Athenæ Oxon. i. 559). His zeal against the Roman catholics gained for him the title of `Papistomastix.'

His anti-Catholic zeal did not prevent him from getting in trouble over his choice in vestments, however, and he was brought before Archbishop Matthew Parker and others at Lambeth, and had to retire from Oxford for awhile because he was so adamant that he would not wear the surplice. But Elizabeth I wanted him to wear the surplice and she used some charm to work him around on that subject:

On the queen visiting the university of Oxford in 1566, she was met near Wolvercot by Humphrey, Godwyn, dean of Christ Church, and other doctors in their scarlet habits. After a Latin oration by Marbeck, the queen said to Humphrey, as he was kissing her hand, `Methinks this gown and habit becomes you very well, and I marvel that you are so straight-laced on this point—but I come not now to chide.' When her majesty entered Christ Church Cathedral, Humphrey was one of the four doctors who held a canopy over her.

Soon after that, he began to wear the surplice!

You might recall that Elizabeth I's visit to Oxford in 1566 was St. Edmund Campion's moment to shine before his sovereign. He was selected to make a welcoming speech for her and impressed Elizabeth and Leicester with his eloquence and learning. Gerard Kilroy, the Campion scholar par excellence, has an article in British Catholic History examining that crucial visit in 1566 from the point of view of those remaining scholars who wanted to welcome Elizabeth and prove that their Catholicism did not prevent them from being good loyal subjects. Here is the abstract: 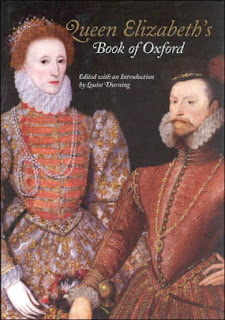 The Queen's visit to Oxford in 1566 has been viewed largely through the prism of John Nichols’ The Progresses of Queen Elizabeth. This article returns to the manuscript sources, all of which survive. All make the disputations central; all but one were written by Catholics who subsequently suffered for their faith: Thomas Neale, John Bereblock and Miles Windsor. The Queen's visit clearly represented for Catholics in Oxford the last chance to try to win her favour. This article explores the complex tensions that existed in early Elizabethan Oxford: between the Calvinists who dominated Christ Church and Magdalen, and those still committed to the ‘old religion’. It highlights the continuities with pre-Reformation and Marian Oxford, arguing that Sir Thomas Pope [who told St. Thomas More about the time and conditions of his execution] and Sir Thomas White had engaged, with the Owens of Godstow, in a coherent programme to preserve as many of the monastic houses as they could. An exploration of the background of the three main witnesses reveals the presence of a determined Catholic resistance to the Earl of Leicester and his Vice-Chancellor, and the beginnings of alternative centres of learning in an ‘underground’ university of halls, taverns and farms that soon included many of the leading scholars: Thomas Neale, George Etheridge, Edmund Rainolds and John Case. It was while moving along this network that Edmund Campion was captured.

Lawrence Humphrey died in Oxford and is buried in the Chapel of Magdalen College.
Posted by Stephanie A. Mann at 12:30 AM