The Silence of Holy Saturday 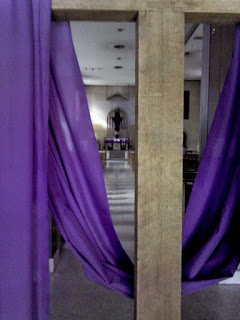 The Tabernacle is empty; the Altar is bare; the Sanctuary Light is out: Holy Saturday. At Blessed Sacrament, where my husband took this picture several years ago, the Adoration Chapel is closed. The pre-sanctified hosts left from Good Friday's communion services are hidden away.

Of course, Jesus reigns in Heaven today as He did yesterday, Good Friday and He will tomorrow, Easter Sunday, and every day before and after, to the ages of ages. But today we pause to mourn for the suffering and death of Our Savior.

I watched some of the EWTN Family Celebrations last weekend. During his talk Father Larry Richards said something like, "Remember when the Romans martyred the Christians in the Coliseum?" Of course I can't remember it as though I directly experienced it; none of us can. But through the Judeo-Christian way of remembering, I can remember it in a significant way. I don't just remember it as a long-ago event; I remember it as something that echoes down the ages today. That's why history fascinates me so much.

Joseph Cardinal Ratzinger meditated on the silence of Holy Saturday, offering these reflections on the death of God and the pause of this day:

The terrible mystery of Holy Saturday, its abyss of silence, has thus acquired a crushing reality in these days of ours. For, this is Holy Saturday: the day of God’s concealment, the day of that unprecedented paradox we express in the Creed with the words: “Descended into hell”, descended into the mystery of death. On Good Friday we still had the crucified man to look at. Holy Saturday is empty, the heavy stone of the new tomb is covering the dead man, it’s all over, the faith seems to have been definitively unmasked as fantasy. No God saved this Jesus who posed as his Son. There is no further need for concern: the wary who were somewhat hesitant, who wondered if things could have been different, were right after all. Holy Saturday: the day God was buried; is not this the day we are living now, and formidably so? Did not our century mark the start of one long Holy Saturday, the day God was absent, when even the hearts of the disciples were plunged into an icy chasm that grows wider and wider, and thus, filled with shame and anguish, they set out to go home, dark-spirited and annihilated in their desperation they head for Emmaus, without realizing that he whom they believed to be dead is in their midst? God is dead and we killed him: are we really aware that this phrase is taken almost literally from Christian tradition and that often in our viae crucis we have made something similar resound without realizing the tremendous gravity of what we said? We killed him, by enclosing him in the stale shell of routine thinking, by exiling him in a form of pity with no content of reality, lost in the gyre of devotional phrases, or of archaeological treasuries; we killed him through the ambiguity of our lives which also laid a veil of darkness over him: in fact, what else would have been able to make God more problematical in this world than the problematical nature of the faith and of the love of his faithful?


The divine darkness of this day, of this century which is increasingly becoming one long Holy Saturday, is speaking to our conscience. It is one of our concerns. But in spite of it all, it holds something of comfort for us. The death of God in Jesus Christ is at the same time the expression of his radical solidarity with us. The most obscure mystery of the faith is at the same time the clearest sign of a hope without end. And what is more: only through the failure of Holy Friday, only through the silence of death of Holy Saturday, were the disciples able to be led to an understanding of all that Jesus truly was and all that his message truly meant. God had to die for them so that he could truly live in them. The image they had formed of God, within which they had tried to hold him down, had to be destroyed so that through the rubble of the ruined house they might see the sky, him himself who remains, always, the infinitely greater. We need the silence of God to experience again the abyss of his greatness and the chasm of our nothingness which would grow wider and wider without him.

But all the glory and joy will come back tonight with the Easter Vigil. In the meantime, Let All Mortal Flesh Keep Silence!