"The Overthrow of Catholic Culture" 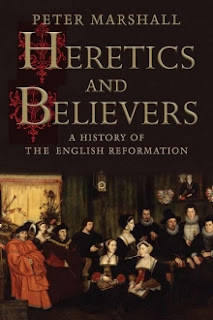 Looks intriguing: From Yale this June:

Centuries on, what the Reformation was and what it accomplished remain deeply contentious. Peter Marshall’s sweeping new history—the first major overview for general readers in a generation—argues that sixteenth-century England was a society neither desperate for nor allergic to change, but one open to ideas of “reform” in various competing guises. King Henry VIII wanted an orderly, uniform Reformation, but his actions opened a Pandora’s Box from which pluralism and diversity flowed and rooted themselves in English life.

With sensitivity to individual experience as well as masterfully synthesizing historical and institutional developments, Marshall frames the perceptions and actions of people great and small, from monarchs and bishops to ordinary families and ecclesiastics, against a backdrop of profound change that altered the meanings of “religion” itself. This engaging history reveals what was really at stake in the overthrow of Catholic culture and the reshaping of the English Church. 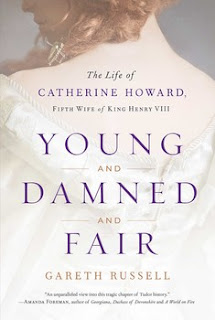 In the meantime, I've received a review copy of Gareth Russell's latest: Young and Damned and Fair: The Life of Catherine Howard, Fifth Wife of King Henry VIII:

Written with an exciting combination of narrative flair and historical authority, this interpretation of the tragic life of Catherine Howard, fifth wife of Henry VIII, breaks new ground in our understanding of the very young woman who became queen at a time of unprecedented social and political tension and whose terrible errors in judgment quickly led her to the executioner’s block.

On the morning of July 28, 1540, as King Henry’s VIII’s former confidante Thomas Cromwell was being led to his execution, a teenager named Catherine Howard began her reign as queen of a country simmering with rebellion and terrifying uncertainty. Sixteen months later, the king’s fifth wife would follow her cousin Anne Boleyn to the scaffold, having been convicted of adultery and high treason.

The broad outlines of Catherine’s career might be familiar, but her story up until now has been incomplete. Unlike previous accounts of her life, which portray her as a naïve victim of an ambitious family, this compelling and authoritative biography will shed new light on Catherine Howard’s rise and downfall by reexamining her motives and showing her in her context, a milieu that goes beyond her family and the influential men of the court to include the aristocrats and, most critically, the servants who surrounded her and who, in the end, conspired against her. By illuminating Catherine's entwined upstairs/downstairs worlds as well as societal tensions beyond the palace walls, the author offers a fascinating portrayal of court life in the sixteenth century and a fresh analysis of the forces beyond Catherine’s control that led to her execution—from diplomatic pressure and international politics to the long-festering resentments against the queen’s household at court.

Including a forgotten text of Catherine’s confession in her own words, color illustrations, family tree, map, and extensive notes, Young and Damned and Fair changes our understanding of one of history’s most famous women while telling the compelling and very human story of complex individuals attempting to survive in a dangerous age.

I'll be intrigued to follow the author's thesis throughout the book:

Putting her household, and her grandmother's, at the center of a biography of Catherine makes her story a grand tale of the Henrician court at its twilight, a glittering but pernicious sunset, in which the King's unstable behavior and his courtiers' labyrinthine deceptions ensured that fortune's wheel  was moving more rapidly than at any previous point at his vicious but fascinating reign. Accounts of the gorgeous ceremonies held to celebrate the resubmission of the north to royal control [after the Pilgrimage of Grace and the imposition of martial law] saw Catherine, the girl in the silver dress, gleaming, Daisy Buchanan-like, safe and proud above the hot struggles of the poor--the perfect medieval royal consort. Until, like a bolt out of the heavens, a scandal resulted in an investigation in which nearly everyone close to Catherine was questioned and which ultimately wrapped itself in ever more intricate coils around the young Queen until, to her utter bewilderment, it choked life from her entirely. (from the Introduction, p. xxi)
Posted by Stephanie A. Mann at 12:30 AM