Some Books Linger With Me: "Hanging Mary" 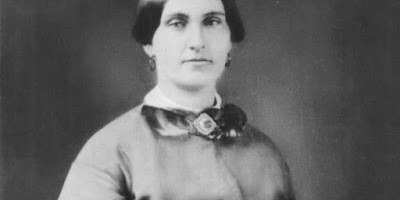 You might remember the quotation from Jane Austen's Northanger Abbey: “It is only a novel... or, in short, only some work in which the greatest powers of the mind are displayed, in which the most thorough knowledge of human nature, the happiest delineation of its varieties, the liveliest effusions of wit and humour, are conveyed to the world in the best-chosen language.” Susan Higginbotham's Hanging Mary reminded me of that quotation, and even after I reviewed the novel in April, I couldn't get it off my mind, so I wrote about it some more, submitting a different commentary to The Christian Review, "Part of the Story: Justice, Love, and Loyalty in Hanging Mary":

Susan Higginbotham’s historical novel Hanging Mary is set in Washington, DC during the waning months of the Civil War. Two narrators, Mary Surratt, proprietor of a boarding house and Honora (Nora) Fitzpatrick, one of her boarders, tell the story of John Wilkes Booth’s conspiracy either to kidnap or murder Abraham Lincoln for the sake of the Confederacy—at least as much as they each know from interacting with Booth, Surratt’s son John, and other conspirators who visit the boarding house from the Autumn of 1864 to the Holy Week of 1865 (Lincoln was assassinated on April 14, Good Friday). . . .

Hanging Mary brings up several moral issues. One issue is whether it is just for U.S. civilians to be tried in a military tribunal without recourse to the protections of civilian courts—a question resolved in 1866 by the U.S. Supreme Court: no, it is not ( Ex parte Milligan ).

The web of conspiracy at the Surratt household brings up other tests of love and loyalty. The genre of historical fiction and the narrative structure of this novel foster meditation on the virtues of justice, love, and loyalty. The reader becomes the judge, weighing the evidence: whose love and loyalty are well-placed and whose are not?